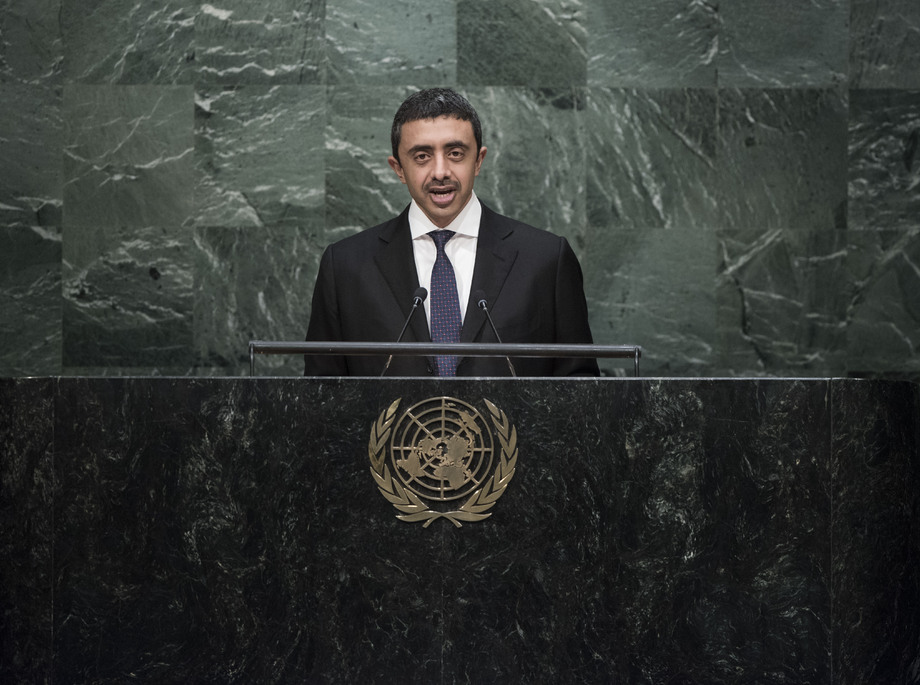 SHEIKH ABDULLAH BIN ZAYED AL NAHYAN, Minister for Foreign Affairs of the United Arab Emirates, said the challenges facing the Middle East today — particularly extremism, terrorism, interference in the internal affairs of States and non-respect for the sovereignty of States — demonstrated that the United Nations had not yet fulfilled its primary objective of maintaining international peace and security.  All Member States must commit themselves to the principles of sovereignty and non-interference and the promotion of dialogue and moderation.  His country was concerned by the escalating tension and violence resulting from terrorist acts committed by elements aiming to destabilize the region and undermine its security.  The brutality of groups such as Da’esh, Al-Qaida, Hezbollah, Ansar Allah and others had intensified.  After five years of conflict and chaos, the regional forces had joined efforts to help restore security and stability; his country had played an effective role in those efforts.

He said that his country stood by the Government and people of Egypt and was part of the coalition to support the legitimate Government of Yemen.  In that country, it was necessary to combat the Houthis and ensure full compliance with Security Council resolution 2216 (2015); the United Arab Emirates therefore supported the efforts led by Saudi Arabia to enhance the capacity of Yemen’s people and to restore stability.  He also turned to Libya and Syria, which was an increasing concern.  A political settlement was urgently needed in Syria, he stressed, to end the systemic mass atrocities committed by the Syrian regime against its own people.  The Council must reach a consensus on a settlement to the Syrian crisis to ensure a political transition and the formation of a new Government there.  His country had received more than 100,000 Syrian nationals, and had extended humanitarian and development assistance totalling more than $530 million.  With regard to the President of Iran’s statement during the debate, he stressed that “Iran’s record does not qualify it to speak about the safety of Hajji pilgrims and human rights”.  He condemned that country’s continued occupation of the three United Emirate islands of Greater Tunb, Lesser Tunb and Abu Musa, and demanded the restoration of full sovereignty of the United Arab Emirates to those islands.