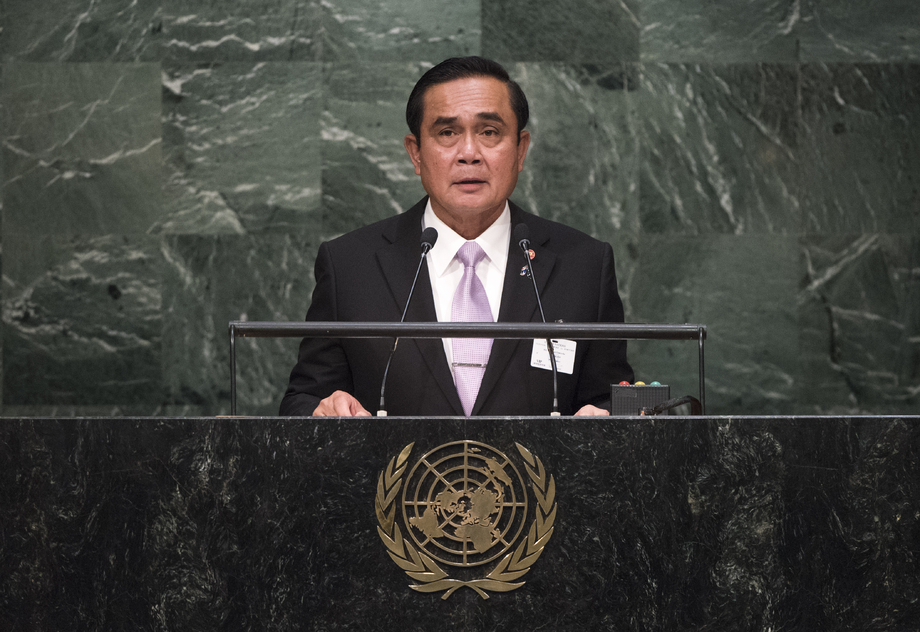 PRAYUT CHAN-OCHA, Prime Minister of Thailand, said the United Nations at 70 had a commendable track record in the maintenance of peace and security, as well as the prevention of human rights abuses.  Nonetheless, numerous challenges persisted and required a holistic approach to solving, especially in the realm of development.  The imperative was to craft a truly sustainable solution to peace and security via the nexus of development and human rights.

Sustainability required that humankind learn to live in harmony with nature, he said.  Today, the adverse impacts of climate change and natural disasters could reverse decades of development gains, and it had become incumbent on every country to “join hands” in solving this pressing global issue.  Thailand reaffirmed its commitment under the Intended Nationally Determined Contributions to reducing its greenhouse gas emissions between 20 and 25 per cent by 2030.  Furthermore, countries could only achieve sustainability when a framework of fair rules existed.  Successful implementation of the 2030 Agenda required joint ownership and collective efforts across all sectors.

Most countries expected the strongest to help the weakest and most vulnerable, he said.  But given the widening gap between the two, the United Nations must not overlook the potential value of the middle countries.  Those countries could stand on their own while remaining in touch with the instructive experiences of their growth and development, therefore serving as a crucial link between the strongest and the weakest.  As a middle-income country, Thailand had taken the position that development would not work when some countries forged ahead while leaving the others behind.  Therefore, the country had pursued the “Thailand-Plus-One” policy for region-wide economic and industrial development, creating transport projects and special economic zones in support of the Association of South-East Asian Nations (ASEAN).

Finally, Thailand attached great importance to building a culture of peace and had actively participated in international efforts to address global conflict, he said.  For those reasons, Thailand had decided to run for a non-permanent seat on the Security Council for the 2017-2018 term.  The Government believed it could serve as a constructive bridge-builder between different cultures and beliefs.  Thailand aimed to promote good understanding and enhance international cooperation in a collective pursuit to achieve the goals of the United Nations.