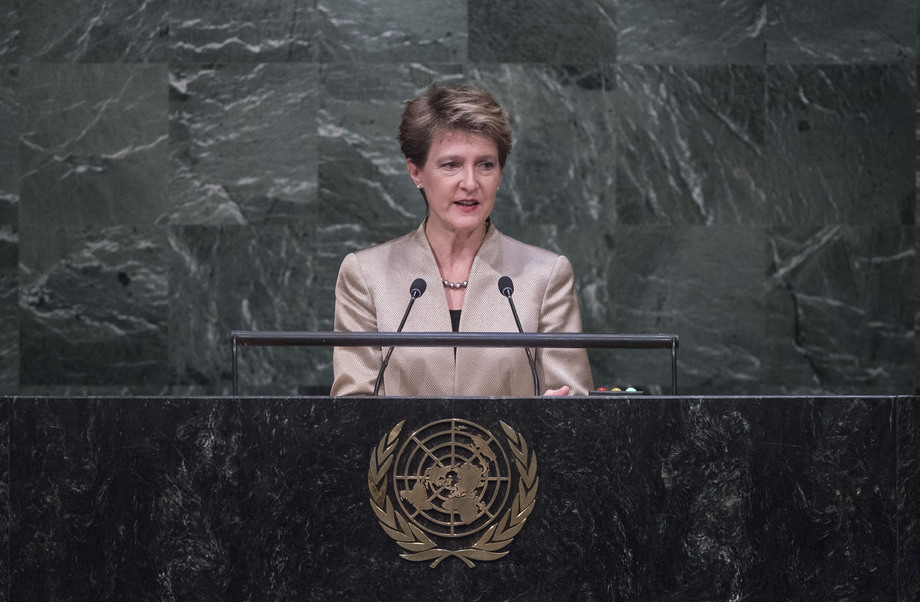 SIMONETTA SOMMARUGA, President of Switzerland, said that while the United Nations had succeeded in avoiding another world war, old and new challenges persisted.  Some 120,000 personnel were active in United Nations peacekeeping operations around the world, which meant that wars and crises were far too many.  There were 60 million refugees in the world today, more than at any time since the Organization was founded.  New problems, such as global warming, had emerged as a threat to international peace and security.

The world must recognize the inconsistencies in its behaviour, Ms. Sommaruga said.  Many countries continued to live in poverty amid great natural wealth.  The world had not succeeded in creating equality, establishing rule of law, ending corruption or protecting the environment.  In many instances, national interests continued to impede resolution of crises.  The challenge of migrant flows required a common approach.  One could not ask Turkey, Jordan, or Lebanon to take all the refugees fleeing Syria.  Nor could a few European countries be asked to take in the wider flow of migrants.

If countries continued to seek answers in an individualistic way, they would create an impasse, she noted.  The United Nations had become more necessary than ever to foster the kind of collective action today’s global challenges needed.  The adoption of the Sustainable Development Agenda must be followed by a binding climate agreement in Paris.  Conflicts had to be resolved through a political strategy, not on exclusively military terms.

Switzerland would continue supporting the greater involvement of women in peace and security, she said, reiterating her country’s call on permanent members of the Security Council to not use the veto when it came to preventing or putting an end to genocide, crimes against humanity and other atrocity crimes.  On human rights, Switzerland’s priority included abolition of the death penalty, prohibition of torture and protection of human rights workers.  Lauding the role played by the International Criminal Court in fighting against impunity, she said the international humanitarian system had reached its limit, as 82 million people required assistance today.  The World Humanitarian Summit in 2016 would provide an important opportunity to revitalize that system, while Switzerland would continue its efforts to strengthen international humanitarian law and global governance.