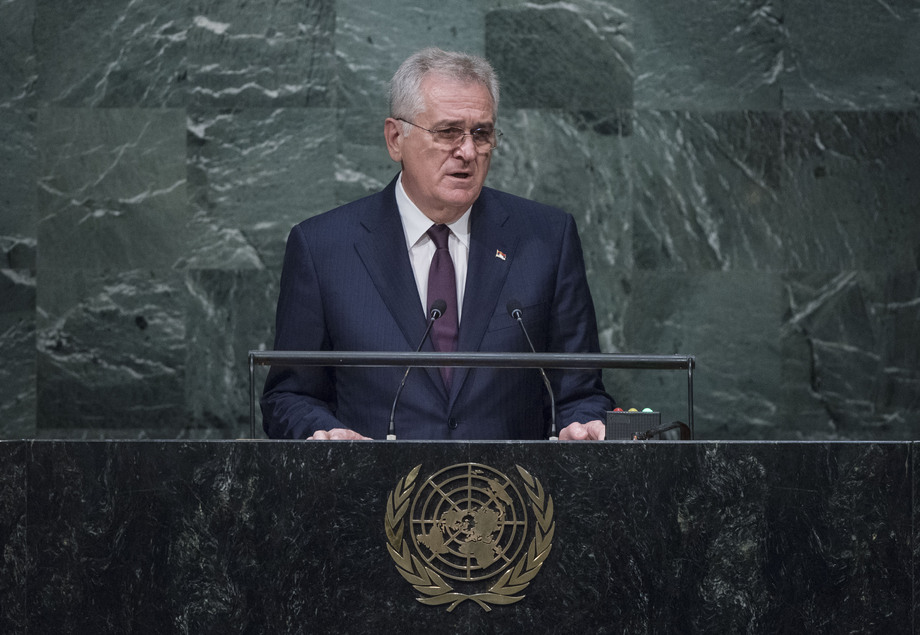 TOMISLAV NIKOLIĆ, President of Serbia, said the world had been tragically divided into the enormously rich and a majority living below the threshold of human dignity.  The United Nations continued to talk about climate change non-committally, as if Member States did not see that it intensified frictions caused by the inequality that already existed in the world.  Most of the developing countries were responsible for just a fraction of global warming.  They must have the opportunity to grow their economies under the same conditions by which others had already become prosperous, even though harmful gas emissions could amount to more than the rich might tolerate.  Wealthy countries could not use the concern over global warming as a pretext for the industrial stagnation of developing ones.

Moreover, Serbia had been the only country that had withstood attempts made by other states against its cultural heritage under the protection of the United Nations Educational, Scientific and Cultural Organization (UNESCO), he said.  In an attempt to falsify history — with the support of certain countries — Albania had submitted a request to UNESCO that Serbian heritage be declared Kosovan.  Should UNESCO accept that request, it would set a precedent for the legalization of violence over national, cultural and religious identity of any peoples.  He therefore called on the United Nations to not allow the monasteries in Kosovo and Metohija — the “spiritual backbone” of the Serbian people — be declared the cultural heritage of the Albanian people.

Finally, the problem of mass migration from the Middle East posed the greatest challenge of today, he said.  Despite its difficult economic situation, Serbia was making every effort to provide a decent stay and accommodation for refugees.  However, if the international community, especially the European Union, failed to make concrete efforts to solve the problem, a humanitarian catastrophe of an even larger scale threatened Southeast Europe.  The “ghettoizing” of the asylum-seekers by some Governments, which erected wire and razor fences to keep out refugees, ran counter to the 1951 Refugee Convention.  The United Nations, therefore, needed a comprehensive plan implemented within the shortest possible time, lest countries altogether leave migrants to the mercy of human smugglers.

Speaking in exercise of the right of reply, the representative of Serbia said that his country was investing maximum efforts for regional stabilization and reconciliation.  He said unfortunately the representative of Albania had contended that dialogue was being conducted between Serbia and Kosovo, but Kosovo was not an independent State and was not a Member of the United Nations.  Albania’s speaker had called for the United Nations to recognized Kosovo as a State, but such statements could jeopardize positive results of the ongoing dialogue.  Resolving the status of Serbia’s southern province with an agreement that was acceptable to all was among his Government’s top priorities.

Taking the floor a second time, the representative of Serbia reiterated that Kosovo was neither an independent State nor a United Nations Member State.