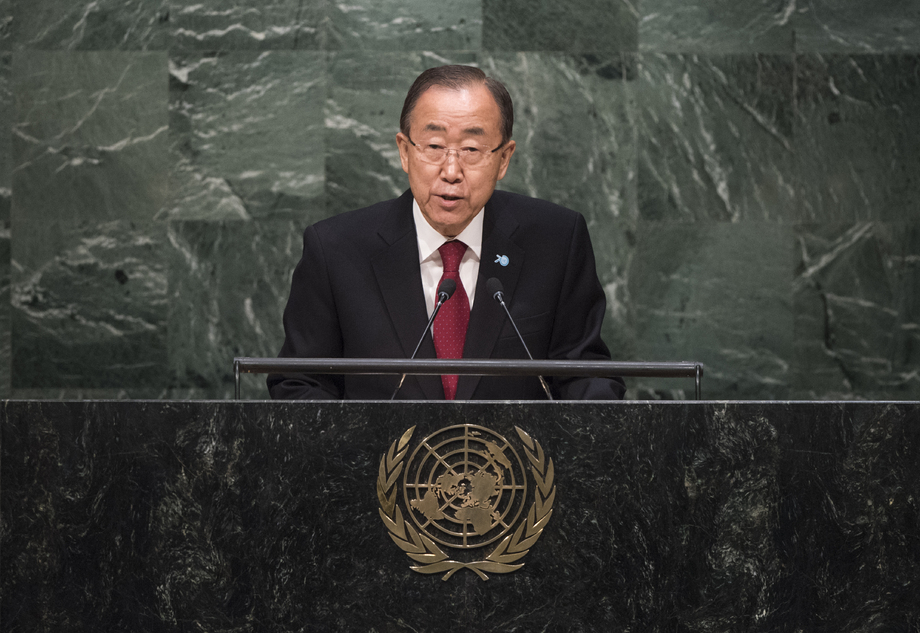 BAN KI-MOON, Secretary-General of the United Nations, said the seventieth session of the General Assembly had opened with a towering achievement:  the adoption of the 2030 Agenda.  While the Millennium Development Goals had made poverty history for hundreds of millions of people, the international community was poised to continue the job while reaching higher, broader and deeper.  “You, the world’s leaders, have committed to leave no one behind — and to reach those farthest behind, first,” he said, calling on the Assembly to build on the momentum with a robust agreement on climate change.

There was “wind in the sails” of climate action, he said, but it was clear that the national targets submitted by the Member States would not be enough.  The choice was between raising the ambition of the world or risk raising temperatures above the 2°C threshold, which science had warned against crossing.  Reaching sustainable development goals meant better organizing.  Instead of walls and boxes, and ministries and agencies working at cross-purposes, the international community must work in synergy, supported by long-term planning, data, and a will to do things differently.

Welcoming the Addis Ababa Action Agenda and the renewed pledge by developed countries to invest 0.7 per cent of the gross national income in official development assistance (ODA), he added that climate finance would be crucial.  Developed countries should meet the agreed goal of $100 billion per year by 2020 and the international community must get the Green Climate Fund up and running.  The world continued to squander trillions in wasteful military spending.  “Why is it easier to find the money to destroy people and planet than it is to protect them?”, he asked.

One hundred million people required humanitarian assistance today, he noted, with 60 million having been forced to flee their homes or countries.  The global humanitarian system was not broken; it was broke.  People wanted emergency assistance but also lasting solutions.  “They may appreciate a tent, but they deserve to go home,” he said.  Lebanon, Jordan and Turkey were generously hosting several million Syrian and Iraqi refugees.  Commending those in Europe that were providing asylum, he urged those countries to “do more”.  After the Second World War, it was Europeans who had sought the world’s assistance.

Four years of “diplomatic paralysis” by the Security Council and other bodies had allowed the crisis in Syria to spin out of control, he went on.  While the responsibility for ending the conflict lay with the Syrian warring parties, it was time now for others, primarily the Council and key regional actors, to step forward.  Five countries in particular held the key:  the Russian Federation, United States, Saudi Arabia, Iran and Turkey.  As long as one side did not compromise with the other, it was futile expect to change.

Noting the conflict in Yemen where airstrikes were destroying cities, and the dangerous drift in the Middle East peace process, he urged leaders to return to the negotiating table.  Da’esh, Boko Haram and Al-Shabaab remained major threats, and it was vital to unite against the brutality of those groups, while ensuring that States did not violate human rights in the fight against terror.

Commending the landmark nuclear agreement between Iran and the P5+1 countries, he said “dialogue and patient diplomacy had paid dividends”.  Leaders must build on the recent agreements in South Sudan and finalize the agreement in Libya.  Renewed dialogue was also necessary to address the tension on the Korean peninsula.  “I am ready to support inter-Korean cooperation,” he said, also expressing concern about the growing restrictions on media freedom and civil society around the world.

Over the past 70 years, the United Nations had helped to liberate millions from colonialism and had supported the struggle against apartheid.  “We have defeated deadly diseases, defended human rights and deepened the rule of law,” he said.  With more connectivity and better tools than ever before, the recipes for positive change were on the table and the ingredients for success were in the hands of the international community.  “When we stand together, there is no limit to what we can achieve,” he said.