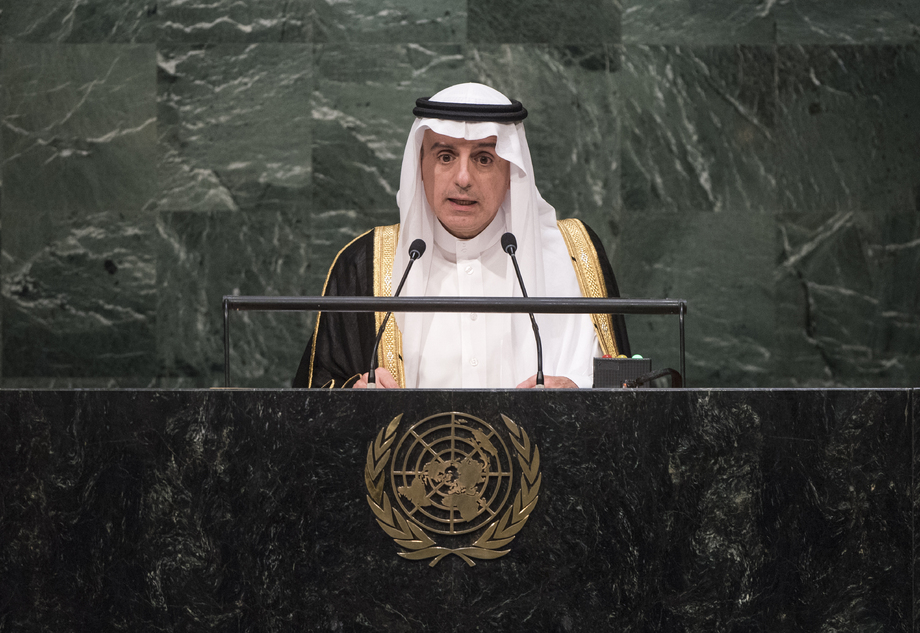 ADEL AHMED AL-JUBEIR, Minister for Foreign Affairs of Saudi Arabia, said that his country was among the founding members when the United Nations was created in 1945.  Stressing the importance of promoting the Charter, international peace and security could be maintained only through justice, equality and respect for international law.  The question of Palestine had long been on the agenda of the General Assembly.  Noting that Palestinians had continued to suffer, he denounced Israel’s flagrant violations of international law.  The Syrian crisis had entered its fifth year, and the world had witnessed the worst humanitarian disaster of the current era.  His Government supported a political solution based on the Geneva communique and the formation of a transitional council in which Bashar al-Assad and other perpetrators of crimes had no place.

The use of military force was the last option in addressing the situation in Yemen, but his State conducted interventions at the request of the legitimate Yemeni Government, following the seizure of the presidential palace by the Houthis rebel group, he said.  A political solution based on the initiative of the Cooperation Council for the Arab States of the Gulf, known as GCC, was necessary.  Calling for the destruction of all nuclear weapons in the region, he welcomed the Iran nuclear deal.  However, that country should exercise good neighbourliness and stop making negative interventions in the affairs of Arab nations.  Iran should also end its illegal occupation of three islands of the United Arab Emirates.  On development, he stressed the importance of taking into account specific aims and level of development in each country.  Finally, he underscored the need for the United Nations to reinvigorate itself to adapt to the changes facing the world.