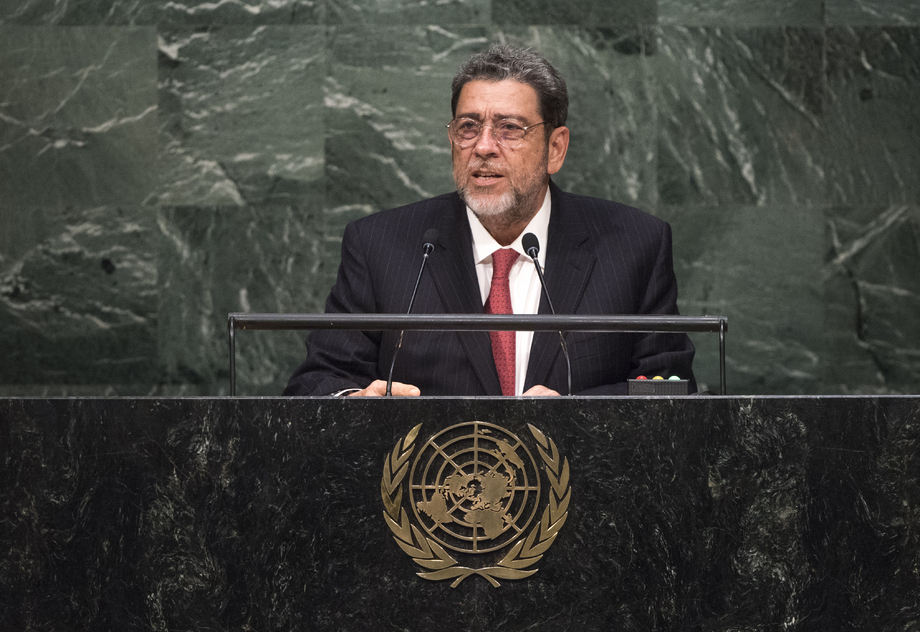 RALPH GONSALVES, Prime Minister of Saint Vincent and the Grenadines, said the consequences of climate change, including rising sea levels, drought and floods, threatened his country — a small, mountainous archipelago of 32 islands scattered across the Caribbean Sea.  Less than two years ago, devastating flooding washed away 17 per cent of its GDP and claimed 12 lives.  The posturing and recalcitrance of some major emitters of global warming gases indicated that the upcoming Climate Conference in Paris, or COP21, might be yet another empty diplomatic dance that prioritized process over progress.

His country and island and coastal States would not settle for any agreement that did not comprehensively and unambiguously bind major emitters to deep and ambitious emissions cuts, and meaningful financing commitments to fund adaptation and mitigation efforts in the most vulnerable countries, he said.  Saint Vincent and the Grenadines embraced a green future and, within the next three years, 80 per cent of its electricity needs would be provided by renewable energy.  But his country’s own efforts were inadequate in the face of a global threat.

He also reiterated a united call of the Caribbean Community for reparatory justice from the major participants in and beneficiaries of the transatlantic slave trade.  That must form part of the post-2015 development conversation.  Turning to Security Council reform, he said that “for too long, reform efforts have fallen victim to the geopolitical ambitions of entrenched Council members and the regional rivalries of legitimate aspirants”.  The clearest signal of the United Nations desire to remain in modern times would be a decision on the contours of a reformed and expanded Council that recognized the emergence of new Powers, revised working methods, and gave voice to other important perspectives, such as those of African and small island developing States.

He supported the Assembly’s decision to fly the Palestinian flag at the United Nations as “an unmistakable endorsement of a true two-State solution” to the Israel-Palestine conflict.  While welcoming the détente between the United States and Cuba, he said there was much more to be done to unshackle the Cuban people from the chains of an unjust, illegal and plainly outmoded blockade.  He also expressed support for the inclusion of “Taiwan” in the work of the United Nations specialized agencies, as the continued exclusion could neither be explained nor justified by any rational and forward-looking global gathering.