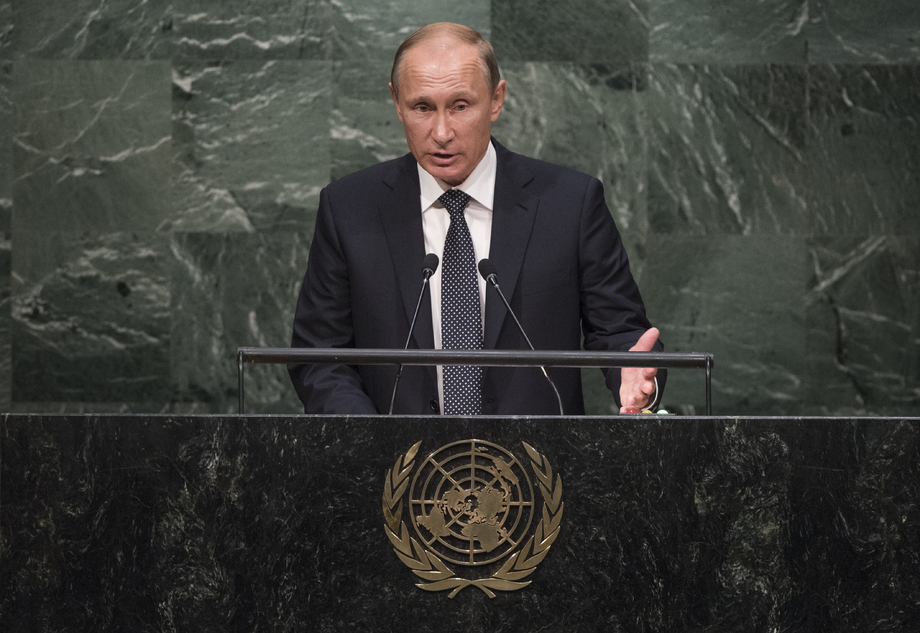 VLADIMIR PUTIN, President of the Russian Federation, said the cooperation in the United Nations was unique, as was its universality.  The Organization had been widely criticized for not being efficient enough, with decision-making stalled on many issues, particularly in the Security Council.  Yet, there had always been differences throughout the Organization’s 70 years, and lack of unanimity was natural for so diverse an organization.  The mission was to reach compromise.  After the end of the cold war, a single centre of domination had emerged.  The world was changing and the United Nations had to change with it.  His country stood ready to work with its partners.  He rejected word play, stressing that every word in the international arena should be clear and transparent, while differences among nations and people should be respected.

There were many problems in the world and instead of learning from others mistakes, the mistakes were being repeated, he said, noting in particular problems in the Middle East and North Africa.  Rather than bringing stability, foreign interference had produced violence, poverty and social disaster.  No one cared about human rights.  It was now obvious that the power vacuum in the Middle East was being filled with extremists and terrorists.  ISIL had been exported to other regions and it planned to go further.  The situation was more than dangerous.

He expressed his country’s belief that any attempts to play games with terrorists, including arming them, was dangerous.  Russia had always fought terrorism in all its forms, and it was an enormous mistake to not cooperate with Syria.  No one but Assad’s armed forces was truly fighting the terrorist forces there.  The current state of affairs on the global stage could no longer be tolerated.  On the basis of international law, the international community should create a general, broad-based coalition against terrorism, and Muslim countries should play a key role.  The Russian Federation supported a comprehensive analysis of threats in the Middle East.  Coordination should be Charter-based.  The flow of people forced to leave their homeland was engulfing neighbouring countries and Europe.  That was a harsh lesson for all, including Europe.  The only way to help would be to restore statehood where it had been destroyed.

The blocked thinking of the cold war was still present among some, he said, pointing to the expansion of North Atlantic Treaty Organization (NATO).  Even with the collapse of the Soviet Union, NATO continued to expand.  The logic of confrontation was exactly what had happened in Ukraine; a coup had been organized from the outside.  Ukraine’s territorial integrity could not be ensured through a force of arms.  He pointed to unilateral sanctions as a sign of the growing economic selfishness. The issues that impacted all people included climate change, and staunching it required a new approach.  The international community should join efforts to live in harmony with nature.  Russia believed in the huge potential of the United Nations and is confident that by working together its members could make the world safe and provide conditions for growth for all.