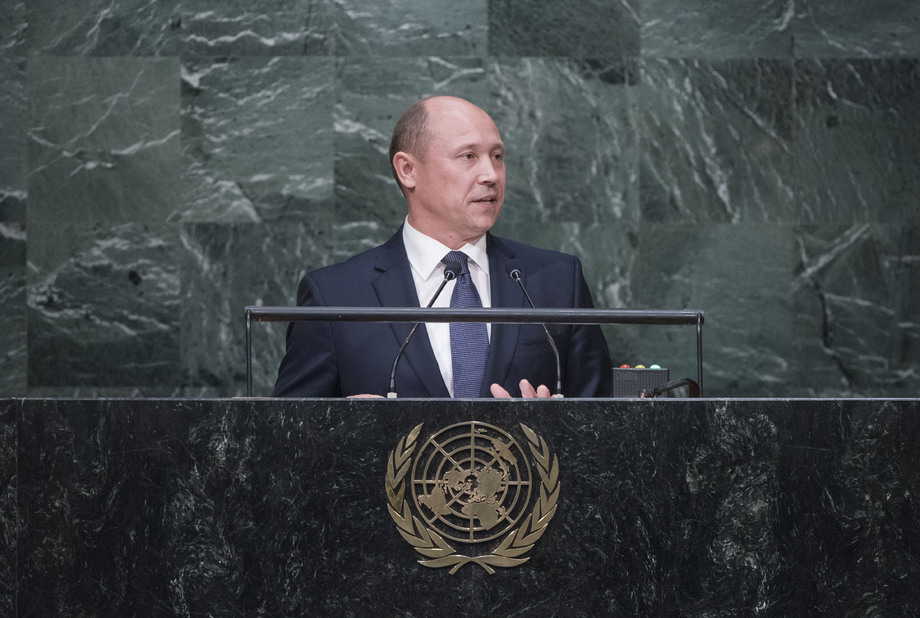 VALERIU STRELET, Prime Minster of Republic of Moldova, said that the Sustainable Development Goals marked an important chapter in his country’s clean energy programme for the coming years.  The nation was on track to ratify the low-emissions development strategy and during the upcoming Climate Conference in Paris it would support the European Union’s mechanisms to have renewable energy account for 20 per cent of all energy consumption by 2020.  The gradual implementation of the European Union-Moldova Association Agreement adopted last year and the creation of the Deep and Comprehensive Free Trade Area brought the Republic of Moldova politically and economically closer to the European Union and helped it to advance the country’s development and modernization.

The world was becoming increasingly turbulent and unsafe, he said.  The illegal use of military force and other forms of violence were widely practiced by States and non-State actors as a means to promote their interests.  Gross violations of international law and a dramatic decline in trust among States had already undermined the central pillars of the international system.  Regretfully, after a period of relative stability, Europe’s security and cooperation system had been seriously shaken.  The annexation of the Crimean peninsula by the Russian Federation, in flagrant violation of international law, and the outbreak of the armed conflict in the eastern regions of Ukraine had directly challenged international peace and security.  Those major negative developments brought back to the world’s agenda the fundamental question of what should be done to restore order and ensure respect for the norms and principles of international law.

For over two decades his country had been divided as a result of the Transnistrian conflict, he said.  However despite external and domestic challenges, it would firmly follow the way of a peaceful settlement.  He reiterated his country’s firm stance that the Russian Federation must withdraw its military forces and ammunition from the Republic of Moldova in accordance with constitutional provisions and international commitments.  The existing peacekeeping operation had fulfilled its mandate and must be transformed into a civilian mission with a relevant international mandate.

The Republic of Moldova had implemented the United Nations Programme of Action on Small Arms and Light Weapons, and during the last three years it had destroyed all stocks of cluster munitions and anti-personnel mines, he said.  He shared the international community’s concerns about the emergence of new terrorist threats to democratic values, human rights and world peace.  The Republic of Moldova had also contributed to peacekeeping efforts, and was transitioning from being a beneficiary of peacekeeping to an active contributor.  On United Nations reform, he said one non-permanent seat on the Security Council should be allocated for the Eastern European Group of States and a Secretary-General should be chosen from the region, in keeping with the principle of equitable geographic rotation.