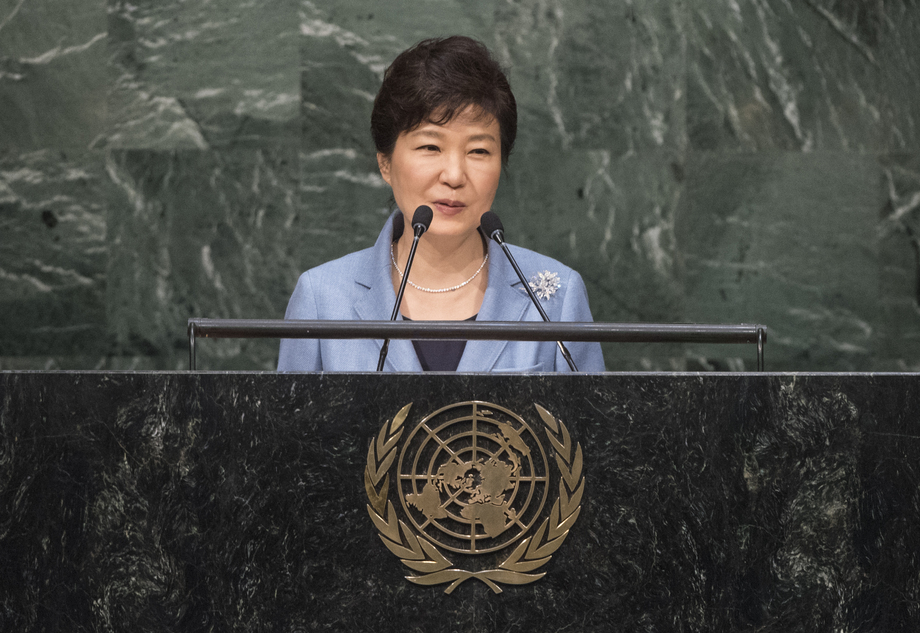 PARK GEUN-HYE, President of the Republic of Korea, said 2015 marked the seventieth anniversary of the joy of her country’s liberation and the anguish of its division.  Over the past 70 years, the Republic of Korea had risen above the ordeals of partition and war and achieved industrialization and democratization, as the United Nations had stood with it.  The country’s achievements were a testament to how the Organization’s goals to achieve a better world were successfully manifested.  Yet despite such efforts, humanity was confronted with multiple challenges around the world, from the surge in extremism represented by ISIL to climate change and infectious diseases.  The international community should rally around the United Nations and return to the founding spirit of its Charter, which called for faith “in the dignity and worth of the human person”.

Regarding the environment, she said it was critical for the international community to produce a meaningful outcome at the 2015 Conference of Parties to the United Nations Framework Convention on Climate Change in December.  Climate change was not a burden, but a fresh opportunity to create future drivers of growth through technological innovation.  As a country that had experienced a devastating war and remained scarred by partition, the Republic of Korea was acutely aware of the importance of peace and was strongly supporting the efforts of the United Nations to protect that goal.  The country, with some 13,500 peacekeepers in 18 United Nations peacekeeping missions, would soon make additional deployments and strengthen its partnership with the African Union.

Referring to the consultations among countries in the region on many issues, she said hers would do its part to help resolve the North Korean nuclear issue, which posed a serious threat to peace in North-East Asia and beyond.  “Resolving the North Korean nuclear issue should be accorded the highest priority if we are to uphold the integrity of the international nuclear non-proliferation regime and live up to the aspirations of humanity for a world without nuclear weapons,” she added.  If the Democratic People’s Republic of Korea would give up its nuclear ambitions and choose the path of openness and cooperation, the Republic of Korea “will work with the international community to actively support North Korea in developing its economy and improving the quality of life of its people”.  The two Koreas were now at a juncture after reaching a 25 August agreement through high-level talks.  “Just as the UN blessed the birth of the Republic of Korea in 1948, I dream for the day to come soon when the entire world will celebrate a unified Korea.

Responding, the representative of the Republic of Korea said on the issues of the nuclear programme and missile launch that the North had claimed that there was another part of the story to its nuclear development programme.  It was very clear that there were no nuclear weapons in the South.  Tension in the region had its roots in the North’s continued nuclear launches and tests, he said, describing his Northern counterpart’s argument as “only a ridiculous attack”.  On the claim the North had only launched a satellite, he emphasized that Security Council resolutions 1718 (2006), 1874 (2009), 2087 (2013) and 2094 (2013) clearly demanded that the North not conduct any launches using ballistic missile technology.  Given its track record of nuclear tests and missile launches, the North had no right to claim any peaceful uses of outer space.  Furthermore, it was bound by its obligations under the relevant Security Council resolutions, he pointed out.  On the parallel policy of economic development and nuclear disarmament, the Democratic People’s Republic of Korea had provided a rationale for its policy, but the pursuit of nuclear weapons was a violation of international law.  That country’s Government received $10 million from the United Nations annually, and it was a pity that it squandered those resources on nuclear development when it should instead use them to improve the lives of its people, he said.  Regarding family reunions, he expressed regret that the North had unilaterally cancelled them just four days ahead of the event, which had been planned as a humanitarian event intended to heal the people’s pain.  The cancellation had shattered the hopes of 200 separated families selected for the occasion from among 10 million people.  They had been eagerly anticipating meeting their estranged kindred, he said, urging the Democratic People’s Republic of Korea to reverse its inhumane decisions and help heal the wounds inflicted on the peoples and soothe their anguish.

The representative of the Republic of Korea said he did not feel the need to get entangled in his Northern counterpart’s claims.  The North denied that it was bound by any of the obligations by which all other Member States abided in a faithful and consistent manner, he said.  According to Article 25 of the Charter, all Member States must accept and carry out the decisions of the Security Council, and it was highly regrettable that the Democratic People’s Republic of Korea delegate had reiterated his “irrational” argument.