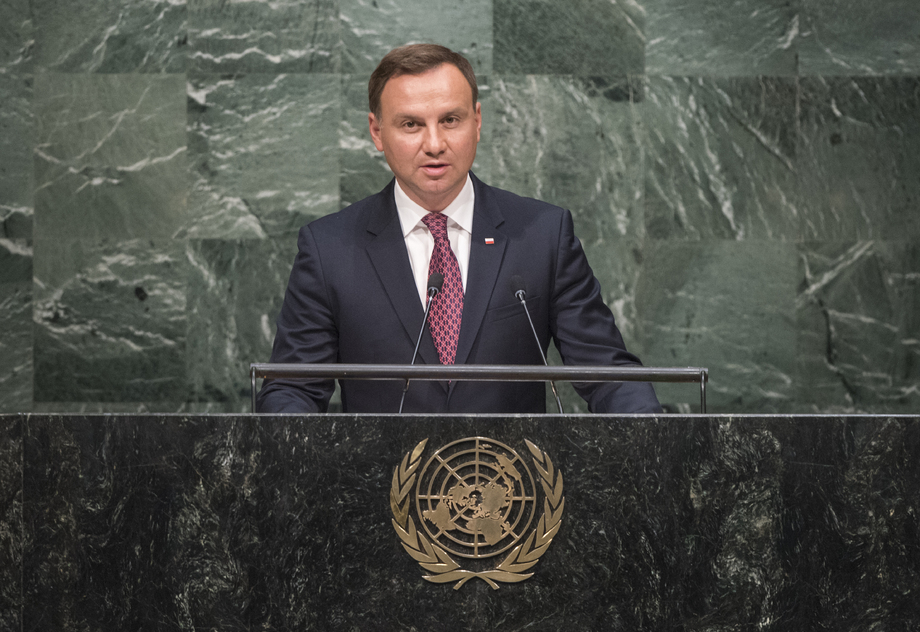 ANDRZEJ DUDA, President of Poland, recalling Nazi Germany’s invasion against his country in September 1939, said Poles knew fully well not to take peace for granted.  Stressing the importance of respect for international law, he said it was Rafal Lemkin, a great Pole of Jewish descent, an eminent lawyer and university lecturer nominated to the Nobel Peace Prize, who had invented and applied in professional literature the term “genocide”, having lost almost his whole family in the German annihilation camps.

The world community must always remember that international law was a fundamental value and tool to build peace, he said.  The use of force in relations between States was not only immoral or incompatible with humanism, but violated international law.  In that regard, the work on streamlining the effectiveness of the United Nations Security Council must continue.  The right to veto in recent years had led on many occasions to a total stalemate of the Council’s work on the most important security issues.  For that reason, his country supported the French proposal to adopt a code of procedure for refraining from a veto when confronted with the gravest crimes in the context of international law.

Looking at today’s trouble-ridden world, he remarked that once a war had broken out, there was usually no binding law to rule on the territories overcome by warfare.  That was evident in the Middle East where State institutions had been either excessively strained or replaced by private armies, terrorist militias and self-proclaimed courts.  More and more frequently, conflicts arose in which litigant parties could be hardly defined and wherein combat was carried out, not by States, but rather by indeterminate armed groups.  Noting the unfortunate systematic restraint of freedom of conscience and religion in various parts of the world and the persecution faced by religious minorities, especially Christians, he appealed to the world community to protect the rights of religious minorities.

His country worked to reinforce the global system of humanitarian aid by fostering cooperation among international institutions, Governments, and non-governmental organizations, he said, adding that Polish humanitarian organizations built schools and welfare centres, assisted victims and responded in the aftermath of natural disasters.  Also important was protecting freedom of speech and addressing the special needs of women, particularly in the aftermath of warfare and mass migrations.  Ready to participate in the attainment of the Goals and to arrive at a new climate agreement, Poland’s economic transformation had contributed to the lowering of CO2 emissions by 30 per cent in relation to 1990.  It also stood ready to increase its direct contribution to peacekeeping and, with that aim, had submitted its candidacy for non-permanent Council membership.