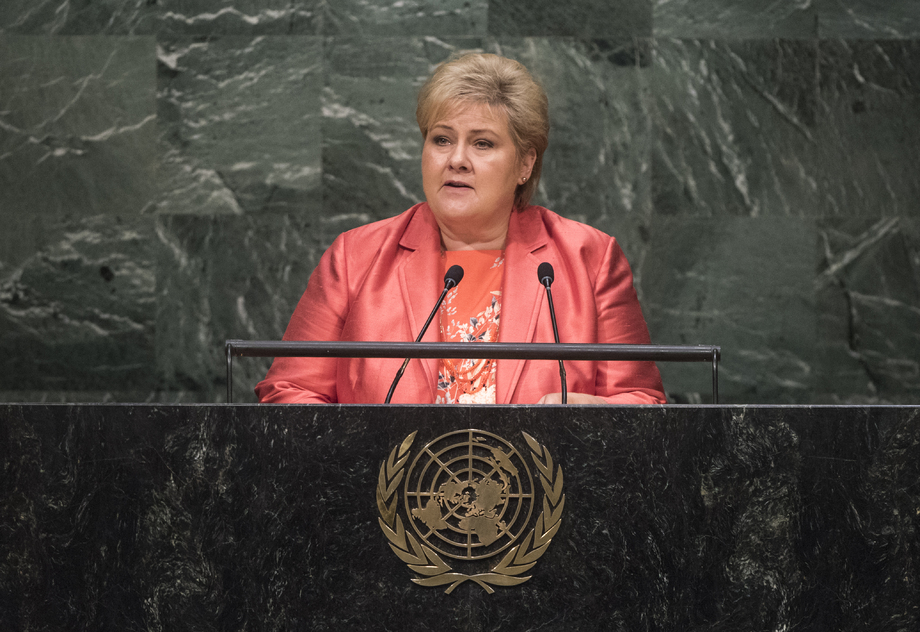 ERNA SOLBERG, Prime Minister of Norway, said the Charter had served humanity well for 70 years despite many challenges.  Yet as the Organization’s seventieth anniversary was celebrated this year, the forces of disorder, discrimination, violence and disruption were increasing.  International law, universal norms and human rights were being violated by States and non-state actors alike.  One consequence was the massive refugee crisis with 60 million refugees and displaced persons.  Respect for internationally recognised borders — one of the important rules of the new world order created in 1945 — had been blatantly violated in Europe over the last several years.  The international community had to return to a situation where all States abided by their obligations under international law.  The world’s four most serious humanitarian crises were, in fact, political crises.  Power hungry politicians, armed groups and military leaders had ignored the plight of their people in the countries concerned:  South Sudan, Yemen, Syria and Iraq.

The United Nation was carrying out three important reviews in 2015:  peace operations, the peacebuilding architecture and Security Council resolution 1325, she said.  The permanent Security Council members had a particular responsibility and Norway urged all States to join the proposed code of conduct to let the Council act decisively against mass atrocities.  Norway supported the French initiative to suspend the use of the veto in such situations.  Norway saw progress in Iraq and had hope for South Sudan.  It was committed to supporting the transitional arrangements to help South Sudan out if its self-destructive conflict.

The crisis in Syria, which had started with peaceful protests calling for freedom, had allowed extreme terror groups like ISIL to gain a foothold, she said.  Norway would follow global norms as it responded to the crisis and would receive refugees at its borders, in line with the 1951 United Nations Convention on Refugees and its international human rights obligations.  It had agreed to take in a high number of refugees from Syria’s neighbouring countries for resettlement under United Nations quotas.  Norway would be hosting a donor conference in cooperation with Germany and the United Nations.

The fight against extremism, which was increasing in different shapes and forms, had to be maintained, she said.  International cooperation at all levels was essential.  In June, Norway had hosted the European Conference on Countering Violent Extremism, where a European Youth Network was launched.  The United Nations Global Counter-Terrorism Strategy would remain a cornerstone of global efforts and Norway welcomed the Secretary-General’s initiative to develop a United Nations action plan  The Prime Minister stressed the importance of including girls and women in the planning and implementation of efforts to counter violent extremism.