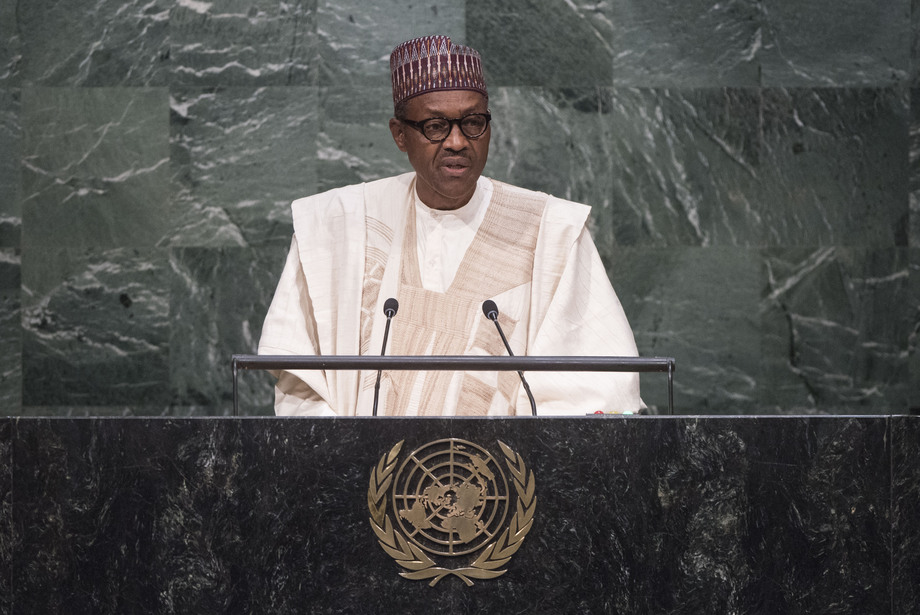 MUHAMMADU BUHARI, President of Nigeria, said that his country had lived by the conviction to uphold the principles of the United Nations, even when judgement went against that conviction in territorial disputes.  Nigeria respected those judgments and abided by them as a mark of respect for the rule of law and the Charter.  Nigeria’s record in peacekeeping was second to none, and had contributed to peacekeeping efforts in Ethiopia, Liberia, Sierra Leone and Darfur.

It was gratifying that most countries had pledged commitment to the post‑2015 development agenda and the Sustainable Development Goals, he said.  Those Goals mirrored the hopes and aspirations of much of the world.  In order for the Goals to be truly global, they must be practical.  In that regard, the core objective of the Goals — to eradicate poverty and reduce inequalities — must be met within the framework of a revitalized global partnership supported by policies and actions as outlined in the Addis Ababa Action Agenda.  Luckily, those two objectives of the Goals were precisely at the centre of Nigeria’s new Administration’s agenda.  In that connection, he appealed to industrialized countries to redeem their pledge of earmarking 0.7 per cent of their GDP to development assistance.

Peace was close to the hearts of Nigerians, he said, even as they were on the front line of the war on terror.  Boko Haram’s war against the people of Nigeria, Chad, Niger and Cameroon may not attract as much worldwide attention as the wars in the Middle East, but the suffering was just as great and the human cost was equally high.  The new Government of Nigeria was attacking head-on the problems it had inherited.

Nigeria intended to tackle inequalities arising from massive unemployment and previous Government policies favouring a few people to the detriment of the many, he said.  He had intended to emphasize technological education for development and lay a foundation for comprehensive care of the aged, the disadvantaged and the infirm.  However, for the time being, terrorism was the immediate problem.  Nigeria intended to put in place a bold and robust strategy to defeat Boko Haram.  Together, with its neighbours Cameroon, Chad and Niger, as well as Benin, his country was working to face the common threat within the regional framework of the Lake Chad Basin Commission, and had established a multinational joint task force to confront, degrade and defeat Boko Haram.

The world now faced a big new challenge in human trafficking, he said.  It was an old evil taking an altogether new and dangerous dimension that threatened to upset international relationships.  Those in Africa were grieved to see on international networks how hundreds of thousands of able-bodied men and women were fleeing to Europe and that in the process, thousands were dying in the desert or drowning in the Mediterranean.  He condemned those human traffickers in the strongest terms, and supported any measures to apprehend or bring them to justice.