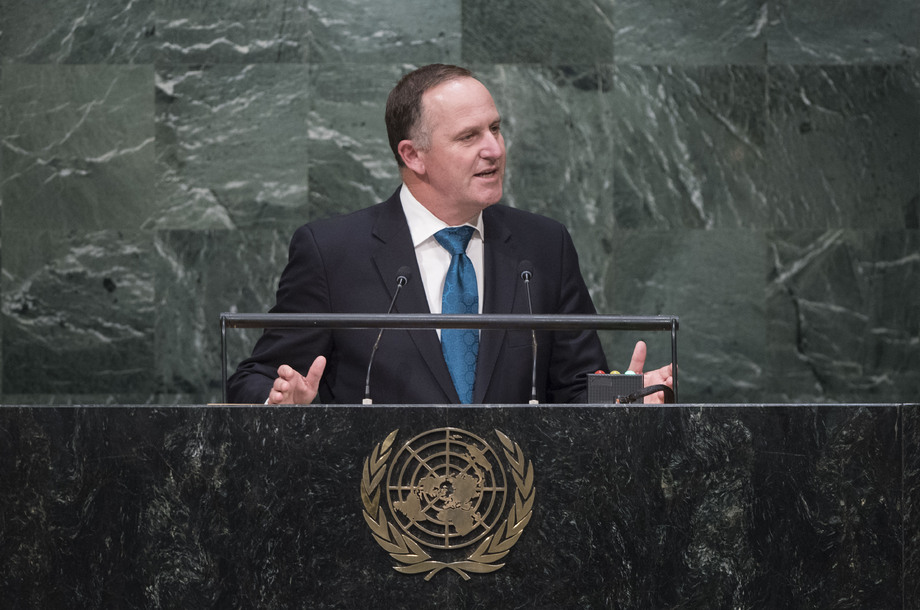 JOHN KEY, Prime Minister of New Zealand, said that a lot could be said about the shortcomings of the United Nations.  There were many and some were serious, but there were things the Organization could do that no other international body could.  As a small country at the bottom of the world, his nation had sought election to the Security Council.  The Council’s agenda was lengthy and contentious, and the dynamics within it were difficult.  The Iran nuclear deal was a notable bright spot this year, and his country was proud that that happened during its presidency in July of the Council.  As Syria descended into lawlessness, the evil nightmare of ISIL that had first taken hold in that country spread death and terror into the region and beyond.  His country joined the international coalition against ISIL, with its armed forces helping the Iraqi Government to train its soldiers to defend its people.

More than 160 leaders had shown up in New York this week to mark the enduring importance of the Organization over the past 70 years, against the back‑drop of the worst refugee crisis since World War II, he said.  It was time for Council members to set aside their vested interests and historical alliances to stop the violence, and end the suffering in Syria.  The 15-nation body must also engage in advancing the Middle East peace process towards a two-State solution for Israel and Palestine.  New Zealand had stood for the Council because small States had a positive contribution to make and provide a voice for those who went unheard too often.  That was why his country convened the first open debate on the peace and security challenges of small island developing States during its presidency.

Part of the Council’s problem was structural, he said.  That the five permanent members had the veto created an extraordinary power imbalance, which was exacerbated by their practices of pre-negotiating outcomes before engaging with the 10 elected non-permanent members, and of taking no action when one of the five did not agree.  His country supported the two proposals — being put forward by the Accountability, Coherence and Transparency Group of countries and by France and Mexico — to limit the use of the veto in mass atrocity situations.  But part of the problem was also behavioural.  The permanent members had become used to exercising power and were protective of their privileged position.  They presumed to control the body’s agenda and determine its processes.

Despite its shortcomings, only the United Nations had the capacity to focus world attention across a range of issues, as demonstrated last week with the adoption of the Sustainable Development Goals, he said, expressing his hope that it would be repeated in Paris in December with the adoption of a meaningful agreement on climate change.  New Zealand announced earlier this week the creation of a marine sanctuary around its Kermadec Islands, and had committed $1 billion in development assistance to the Pacific, focused on supporting sustainable fisheries management.  That aid was dedicated to the areas where it could generate real results for real people.