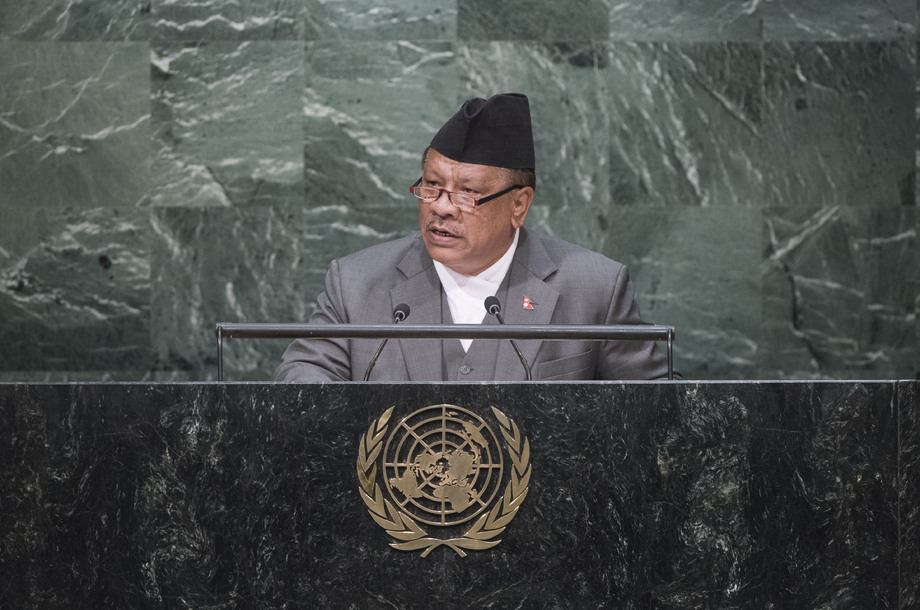 PRAKASH MAN SINGH, Deputy Prime Minister of Nepal, said that after a rigorous eight-year process, his country had recently promulgated an inclusive, democratic Constitution.  That document opened new avenues of empowerment, progress and well-being for all disadvantaged groups, including women, Tharus, Madhesis, indigenous peoples, Muslims and Dalits.  It guaranteed a representation rate of 33 per cent for women in the Parliament.  Nepal supported the United Nations and felt there was a need for a stronger Organization that was capable of delivering results based on a wider respect for and observance of the principles of sovereignty, territorial integrity, political independence and non‑interference, among other principles.  Noting that some 120,000 peacekeepers from his country had served the United Nations over the past six decades, he said that more leadership opportunities should be given to Member States commensurate with their contribution levels.

Terrorism was the biggest threat to peace, security and development today, he stressed, adding that the threat demanded greater unity, solidarity, and continued and consistent collaborations among nations in order to address its root causes.  That was best done under the auspices of the United Nations; therefore, Nepal was in favour of a comprehensive convention on international terrorism.  Further, his country stood for the general and complete disarmament of all weapons of mass destruction, as well as against the illicit transfer of small arms and light weapons.  Recognizing the legitimate rights of the Palestinian people for an independent State, he also called for a just, lasting and comprehensive peace in the Middle East.

Since the categorization of the least developed countries in 1971, the number of those countries had grown from 25 to 48.  Only four States had so far been able to graduate from that status.  An enhanced level of partnership and collaboration, as was enshrined in the Addis Ababa Action Agenda, was key to addressing those challenges.  Similarly, he looked forward to a meaningful review of the Istanbul Programme of Action and for the effective implementation of the Vienna Programme of Action to make a difference in the lives of the 450 million people living in landlocked developing countries.  He discussed other challenges facing the global community, including climate change and the “mega-trend” of migration, and described the current state of Nepal’s reconstruction following earthquakes that had struck the country in April and May.