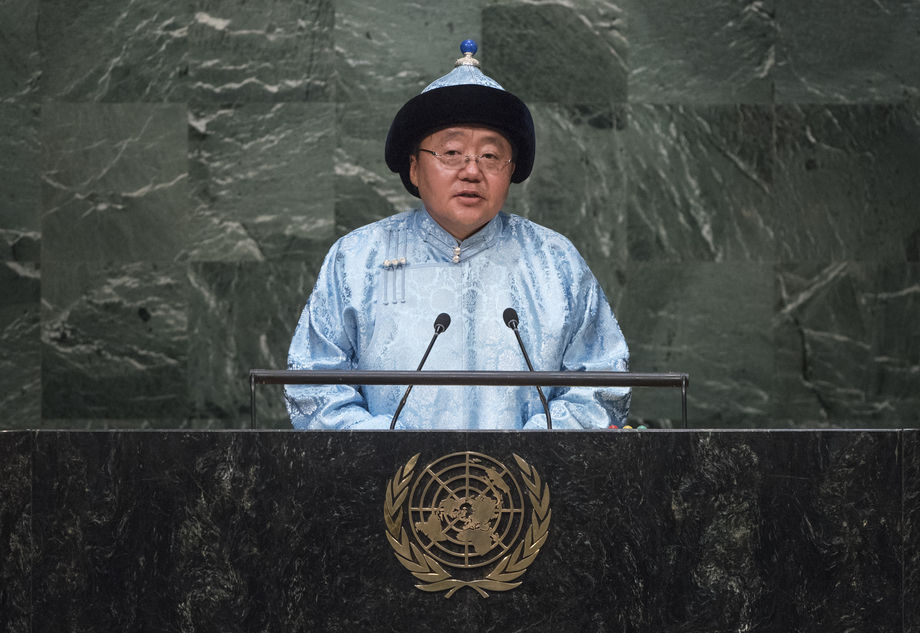 ELBEGDORJ TSAKHIA, President of Mongolia, said that “the past 70 years were the best 70 years ever”.  But despite achievements among the family of nations, “our home” was becoming a more turbulent and fragile place.  Many of the targets of the Millennium Development Goals had been achieved, but some had failed.  The international community had learned lessons about working together and with the 2030 Agenda, there was now a truly universal and ambitious action plan.  Robust, inclusive and open mechanisms would advance implementation, and monitoring and accountability would make that process reliable.  Mongolia appealed to every country to adopt national laws to implement the Sustainable Development Goals.

Over the last quarter-century, he said, his country had relentlessly striven to build an open and just society with a free market economy, participatory democracy and environmentally conscientious policies.  There had been notable progress in the areas of governance transparency and reduction of poverty.  The life expectancy of Mongolians had increased by 7 years, while GDP had increased more than 20-fold.  Within the span of a single generation, Mongolia had transformed from one of the most isolated and closed regimes to one of the most vibrant and open democracies.  It had among the most open and fair electoral systems in the region, with nationwide electronic voting and biometric voter registration.  “We no longer use the wooden or paper boxes of finger inks,” he said.

All nations, he added, must bear the responsibility for protecting the planet and its ecosystem for the benefit of present and future generations. “We, Mongols, are eager to contribute,” he said.  The country had become one of the 20 largest peacekeeping contributors in the world.  For 23 years, it had pursued a nuclear-weapon-free status, and in Asia, Mongolia was an “honest broker” who promoted peace and security, with its status of “permanent neutrality”.  Noting that the country was running for membership in the United Nations Human Rights Council, he said that when he saw giant military exhibits, he wondered at the huge amounts of money, human ingenuity and time spent on war machines.  Just a fraction of the money and technology presently wasted on the “masculine war show”, could solve many of the world’s troubling issues.