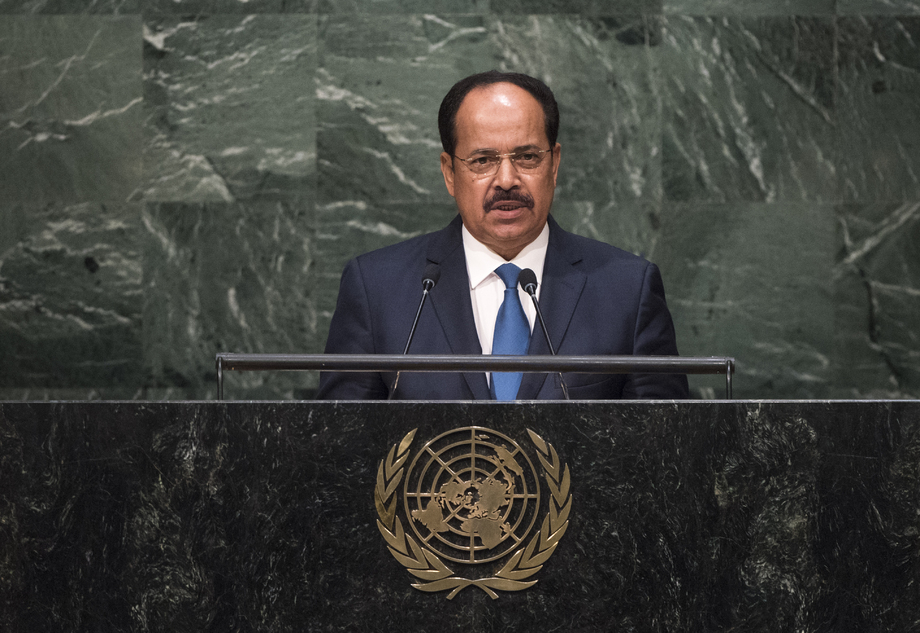 HAMADI OULD MEIMOU, Minister for Foreign Affairs of Mauritania, speaking on behalf of President Mohamed Ould Abdel Aziz, said the seven decades since the founding of the Organization had been spent in strenuous pursuit of its global goals.  While it had many successes to its credit, the United Nations also continued to face old and new challenges.  He expressed hope that the Sustainable Development Agenda would succeed in addressing many of those challenges.  Mauritania had attained remarkable results over the past years in improving the lives of the people.  Unemployment had been curtailed and basic services were being provided, while rule of law, judicial independence and transparency were being strengthened.  In recognition of the organic nexus between security and development, the country had taken forward both priorities together in national policies and programmes.  A culture of dialogue had been promoted with people and groups to prevent them from being misled into religious extremism.

The Sahel had witnessed a proliferation of networks of organized crime, gun-running and unauthorized migration, endangering security of the region, he said.  In that context, countries of the Sahel had embarked on coordinated efforts to achieve sustainable development and address common challenges.  Upholding its commitment to maintain international peace and security, Mauritania participated in United Nations peacekeeping operations in Africa.  While the conflicts in Yemen and Syria required greater efforts towards achieving political solutions, the process under way in Libya must be advanced by all stakeholders there.  The Arab-Israeli conflict continued to be a threat to peace and security of a region that was vital to the world.  Despite successive United Nations resolutions, it was regrettable that the parties had failed to reach agreement on the creation of an independent Palestinian State.

Africa faced a multitude of challenges in the security and development fields, he said, stressing the need to establish a well-developed health system to prevent the outbreak of diseases.  Despite their challenges, most African countries had made progress in achieving the Millennium Development Goals.  A continent with immense natural and demographic resources deserved a permanent seat on the Security Council.  The objectives of the United Nations would not be achieved unless full justice was attained in the distribution of wealth across the world.