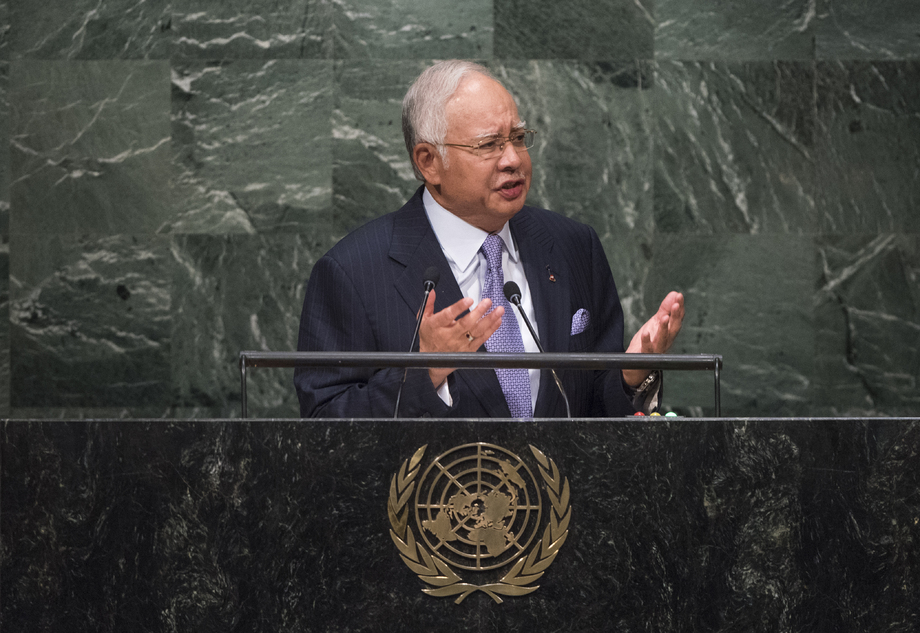 DATO’ SRI MOHD NAJIB BIN TUN HAJI ABDUL RAZAK, Prime Minister of Malaysia, said that five years ago he had called for a global movement of moderates of all religions and of all countries to marginalize extremists and shape an agenda towards peace and pragmatism.  Central to that effort was reaffirming Islam’s true nature; it must be acknowledged that “we are not winning” the propaganda war against ISIL.  That group’s twisted narrative was not being adequately countered to prevent many misguided people from joining it or supporting from afar.

Islam unequivocally prohibited killing civilians during war, he said.  It explicitly protected minorities and respected those of other faiths.  It urged the pursuit of knowledge and stressed both justice and compassion.  That meant that there should be no strife among Muslims, including between Sunni and Shia who may take different paths but nevertheless sought the same destination.  Islam also condemned the destruction of historic sites that were a part of the world’s cultural heritage, and it was a lie told by ISIL that it was their duty to destroy them.

The Malaysian Government had helped develop an important body of scholarship that combatted ISIL’s warped ideology.  An international group of Sunni and Shia scholars representing a cross-section of the global Muslim community had convened in Kuala Lumpur with a mission to define an Islam State that was based on the continuity of Islamic religious thought over the past fourteen centuries.  It was nothing like the entity in Syria and Iraq that usurped that name.

As the world cooperated to solve the scourges of poverty, hatred, war and man-made and natural disasters that had given the world the refugee crises seen today, it was important to draw from spiritual traditions and the generosity of spirit that went beyond legal requirements, he stressed.  The desperate migrants, the victims of extremists and those whose lives had been degraded by poverty and hunger should not seen as strangers but rather as brothers and sisters.