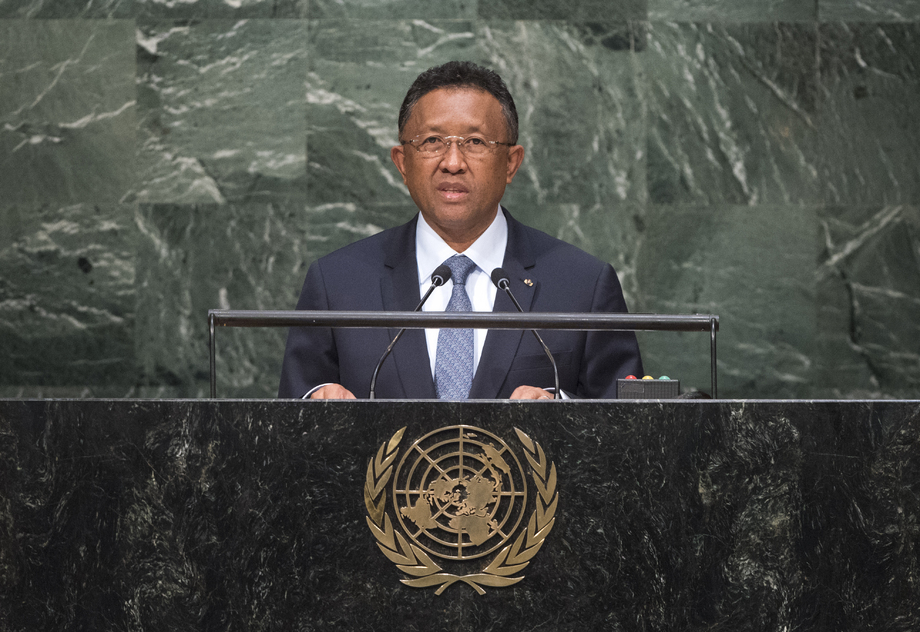 HERY RAJAONARIMAMPIANINA, President of Madagascar, said the world was now experiencing a “rendezvous with history” with the start of the Sustainable Development Goals.  The United Nations had gone through highs and lows and had its strengths and weaknesses, but was still there to serve humanity.  The world did not have the right to disappoint the expectations of its peoples, but must ensure the well-being of populations as inscribed in the United Nations Charter.  The threats against global security deserved urgent attention:  terrorism, climate change and the recurrent problems associated with poverty were also factors affecting populations.  By adopting the new 2030 Agenda, the world offered Governments a solution to act effectively.

In Madagascar, it was important to take the same path as the United Nations, he said.  The world had just set the foundations for a new framework for development, and had made a commitment that would lead the way for future generations.  The new agenda, which was a benchmark, would support the achievement of the national development plan of Madagascar.  Climate change was constantly deserving of the world’s attention.  The United Nations Climate Conference in Paris would be the ideal framework to show solidarity in that fight.  It was important to recognize that developing countries were not the main parties responsible for climate change, although they paid a heavy price.  Madagascar was systematically suffering from the consequences of climate change, resulting in losses and often destroyed efforts to make progress, socially and economically.

Madagascar held a significant portion of the world’s biodiversity, and had supported the recent United Nations resolution on trafficking wild flora and fauna, he said.  His country had been fully involved in the implementation of the Sendai Framework for Disaster Risk Reduction 2015-2030.  There was currently a protective social policy aimed to reduce the number of people living in extreme poverty by 2030, in line with the new Sustainable Development Goals.  It had also launched a campaign for the acceleration for the reduction of maternal mortality, and was also combatting early marriage.  On food security, he said there were promising reginal prospects to make Madagascar the bread basket of the Indian Ocean.

Madagascar’s population was young, which meant they needed education and job training, he said.  A new era was opening before the world; a new hope was being built with the advent of the Sustainable Development Goals.  By coming together today, each nation was showing its commitment to move forward.  The goals should not just be a reference point to fight against poverty, but for sustainable human development on the larger scale. Human capital, both the actor and the beneficiary of the Sustainable Development Goals, must be at the heart of all the world’s actions.  The security of peoples in all its forms — from wars, crises and insecurity — was the root cause of the systematic violations of human rights, and peace and security remained the Achilles heel of all development strategies.  Because of that, his country was perusing its own path towards democracy and sustainability.