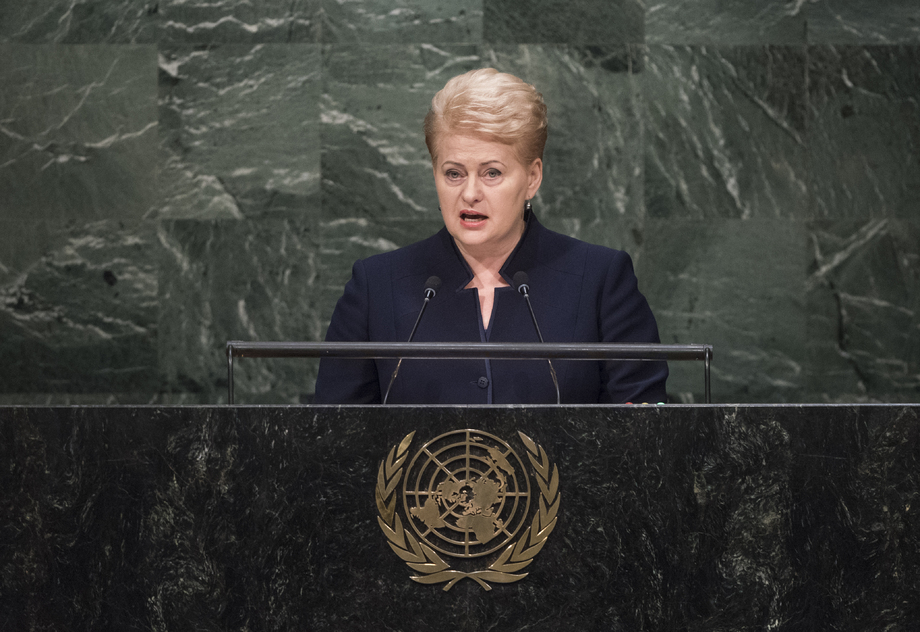 DALIA GRYBAUSKAITĖ, President of Lithuania, said that the ideals and principles of the United Nations were being threatened around the world.  Today, in the twenty-first century, women and girls were abused and sold in slave markets.  The Charter had been breached in the heart of Europe with no consequences.  The Russian Federation had invaded Crimea; that annexation and military aggression stood out among the world’s many crises because of its wide implications for the future of peace and security.

Against that back-drop, the international community had been unable to act, she said.  “If you close your eyes to crimes, they do not disappear,” she stressed in that regard.  Vetoing the Security Council resolutions commemorating the Srebrenica massacre and blocking the investigation of the downing of Malaysia Airlines flight MH17 were insults to the victims of those tragedies.  Moreover, the very least the Security Council could do was to put an end to the use of veto in the cases of war crimes, crimes against humanity and mass atrocities.  By protecting the criminals, the four Security Council vetoes on Syria had done nothing to resolve the situation.  Now the world was facing one of the worst humanitarian crises in recent history.

“Lawlessness breeds the worst of the worst — extremism, radicalism and terrorism,” she went on, adding that the world could not allow those elements to take hold.  The United Nations must be adapted to today’s realities and must do much better to tackle the underlying causes — not just the symptoms — of crises.  It must also improve its work in prevention and mediation in order to save lives.  In the twenty-first century, the world would need a strong and reformed United Nations.  “The United Nations will cease to exist if people stop believing in it,” she stressed.