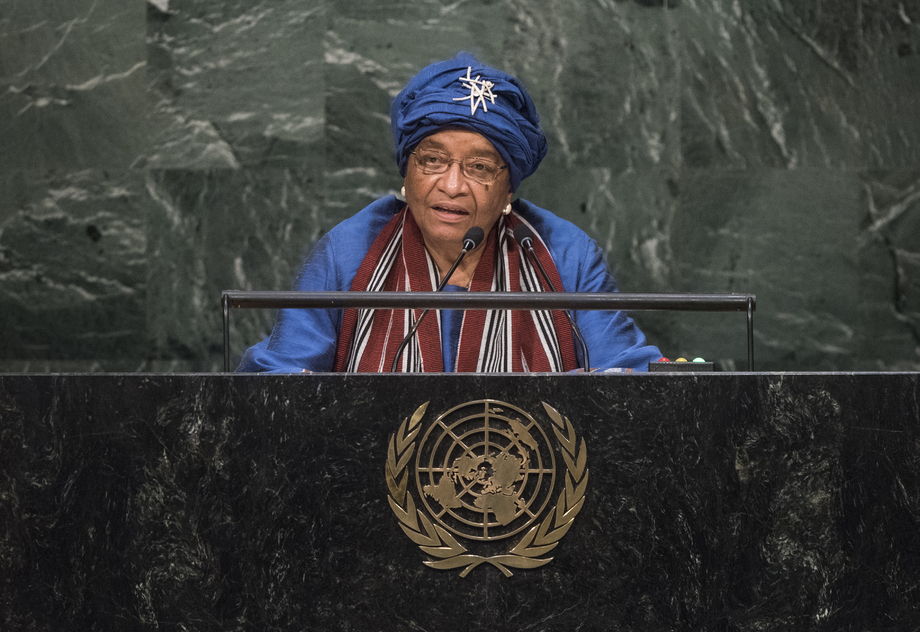 ELLEN JOHNSON-SIRLEAF, President of Liberia, said that the United Nations was called to action by new and emerging challenges.  Africa, the Middle East, Asia and even Europe still had vortexes of conflict.  Migrants and people seeking refuge from conflicts and economic hardships were swirling across Europe.  Africa was haunted by the growing threats of destabilizing forces like Boko Haram and ISIS as well as attempts to reverse democratic initiatives, such as in Burkina Faso.  She wondered if the United Nations, at 70, was hindered by inflexible structures and overburdened by bureaucracies, and if the Organization was fit for purpose to play its role in transforming the world over the next 15 years.

Welcoming the United Nations comprehensive review of peacekeeping operations and a review of the Organization’s peacebuilding architecture, she said her country could attest, with gratitude, to the critical and indispensable nature of the peacekeeping and peacebuilding functions for post-conflict countries.  She also welcomed the global study on implementation of Security Council resolution 1325 (2000) on women’s participation in peace processes.  Since the resolution’s adoption 15 years ago, improvement had been made in the status of women, but much more remained to be done.  In 70-year history of the United Nations, only three women had served as President of the General Assembly, one of them being her compatriot Angie Brooks Randolph.  Today only a few women served as Special Representative of the Secretary-General, and not a single woman had ever served as Secretary-General.

Turning to the Ebola crisis, Liberia, Guinea and Sierra Leone bore witness to the fundamental creed of the United Nations, she said, expressing gratitude for outpouring support.  She also thanked the Secretary-General, along with the African Development Bank, the African Union, the European Union and the World Bank, for convening the international conference on post-Ebola recovery.  Her country was implementing its post-Ebola economic stabilization and recovery plan with the expectation that it would receive support from bilateral and multilateral partners.  The three affected countries had also formulated a regional recovery strategy.  Liberia was determined to address the development losses by rebuilding better and more resilient health and education systems.