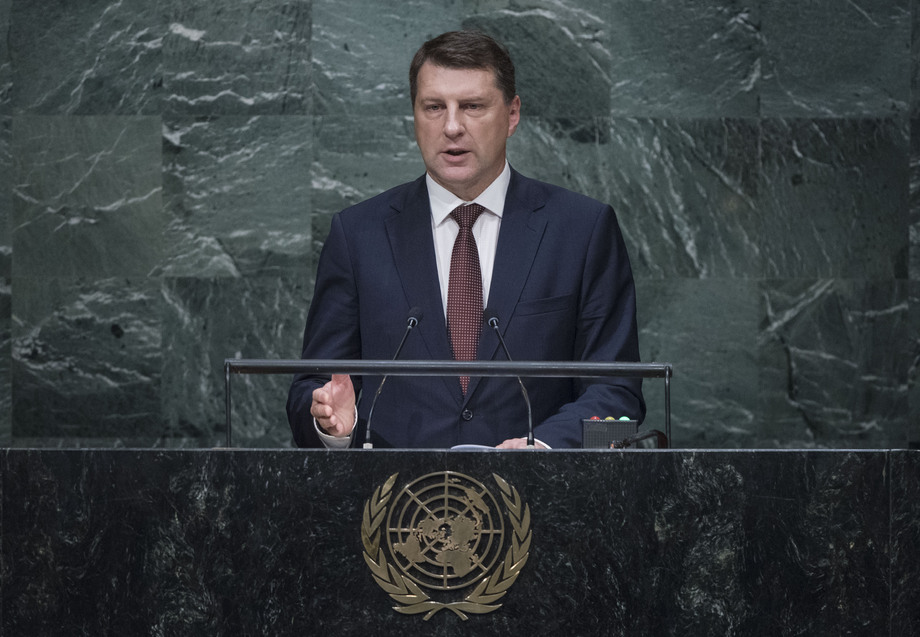 RAIMONDS VĒJONIS, President of Latvia, recalled that, in July, the world had marked the seventy-fifth anniversary of the Welles Declaration on the non-recognition of the illegal Soviet invasion of the Balkan States.  The United Nations firm stance had been a great support in that regard.  Today, far too often, international norms and principles continued to be violated and the United Nations had been unable to intervene.  The Organization, and in particular, the Security Council, must be able to fulfil its mission with a renewed sense of responsibility.  Latvia supported expanding the Council in both membership categories, in particular the addition of at least one non-permanent seat to the Eastern European Group of States.  Latvia also backed the proposal to restrain the use of the veto in situations involving mass atrocity crimes.  The Council had recently been blocked by the use of a veto in two cases, the search for justice in the downing of Malaysian flight MH17, and the attempt to block the Russian Federation’s aggression in Ukraine.  In that regard, the Russian Federation must end its support to separatists and use its influence to make them adhere to the Minsk Agreement.

The horrific conflict in Syria which had destabilized the whole region had entered its fifth year.  “The people of the international community must not abandon the people of Syria,” he said, adding that concerted action was needed to defeat the evil of terrorism and for achieving lasting peace in the region.  Increased migration from Middle Eastern and African countries to Europe had become one of the greatest humanitarian challenges of our time.  Migration also persisted in the Asia-Pacific region and the Americas.  Beyond immediate humanitarian responses, those trends required long-term, comprehensive solutions.  Emphasis must be put on the root causes of increased illegal migration, including by strengthening the prevention of conflict.

The European Union was an important partner of the United Nations, as demonstrated in the Central African Republic, Mali and other places, he said.  His country would continue to support United Nations peacekeeping.  This year, the Organization would conclude “two of the most important international processes of our time”.  The world had just adopted the Sustainable Development Goals, which must “make real changes” to end poverty and build action-oriented policies.  Most importantly, the involvement and accountability of all stakeholders at all levels would be critical to the success of the Goals.  Those targets would be greatly reinforced by the approval at the Climate Conference in Paris of a new universal agreement to address climate change.  “Failure to undertake ambitious mitigation actions cannot be accepted; any further postponement will make adaptation extremely costly or even unfeasible,” he said, adding that his country supported the reduction of greenhouse gas emissions.

The United Nations would continue to play an important role in the search for solutions to future challenges through global discussion, raising awareness, creating expertise and building trust, he said.  At the forefront of those issues was the fast evolution of technology, which was a source of progress and growth.  Finally, he said, next year the United Nations would choose a new Secretary-General; it was important that the selection process be transparent and inclusive.  It was high time for an Eastern European candidate to be chosen for the position, as it was the only regional group that had never been represented as Secretary-General.