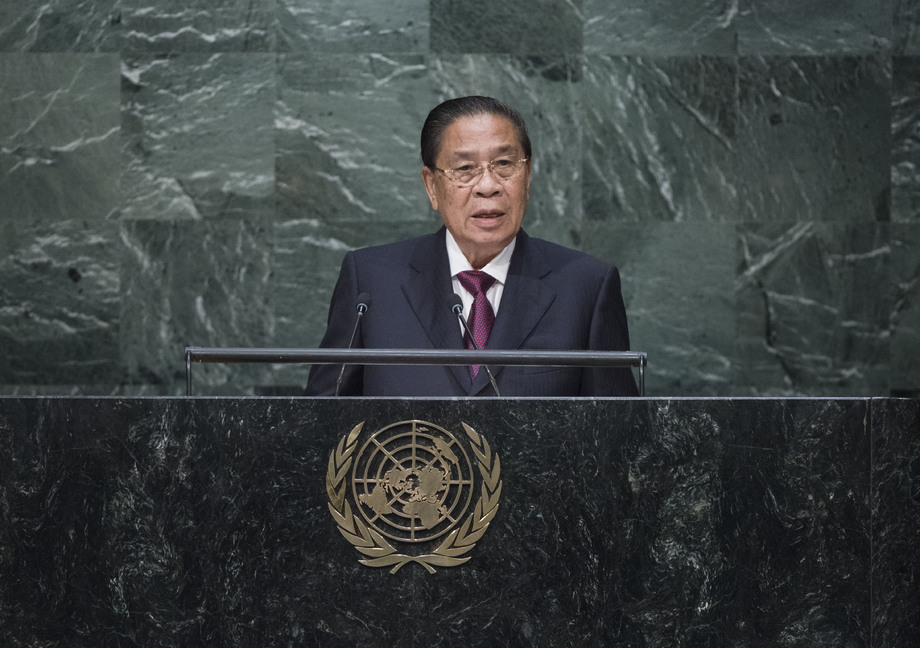 CHOUMMALY SAYASONE, President of the Lao People’s Democratic Republic, said that the international community must undertake comprehensive reform of the Organization so that it could respond to emerging challenges more effectively.  He welcomed the adoption of the new Development Agenda, and noted that to realize its goals and targets States must honour the political commitment to strengthening global partnership and cooperation at all levels.  Praising the parties that had reached agreement on Iran’s nuclear programme, he said the issue of Palestine should be resolved peacefully with two independent States, Palestine and Israel living side by side in peace based on the Arab Peace Initiative and the borders recognized in relevant resolutions.  He welcomed the re-establishment of diplomatic relations between the United States and Cuba and hoped it would lead to an end to the embargo.

Turning to the huge impact of climate change, especially on the least developed countries, he said it was incumbent upon the international community to help them build long-term capacity.  He hoped the upcoming Climate Conference in Paris would adopt measures to address climate change in the coming years.  On regional matters he noted that ASEAN aimed to build an integrated economic community by the end of 2015.  His country would assume ASEAN chairmanship in 2016, the first year of that community.

This year was also his country’s fortieth anniversary, he said.  It had gone through a period of healing the wounds of war and advancing national development.  However, challenges remained from the impact of regional and global economic and financial crises and natural disasters.  He called on development partners to continue their support for sustainable development.  Another obstacle to development was the legacy of war on agriculture and people’s livelihood, development of infrastructure and investment programmes in areas contaminated by unexploded ordnance.  Their clearance required huge resources.  He called upon those countries not yet party to the Convention on Cluster Munitions to accede to it.  Party to seven international human rights instruments, the Lao People’s Democratic Republic had put forth its candidacy for membership in the Human Rights Council for the period 2016-2018.  He looked forward to support for that candidacy.