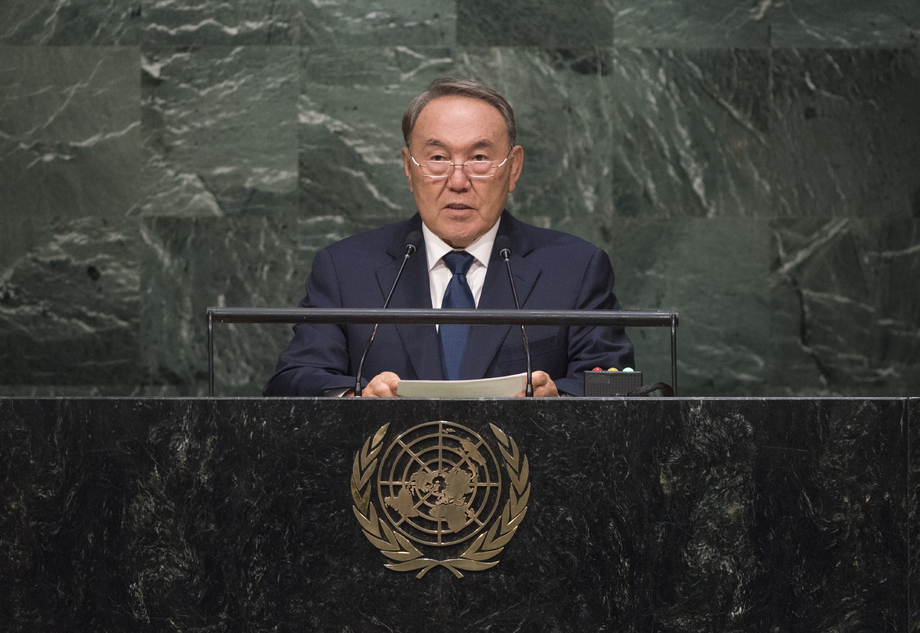 NURSULTAN NAZARBAYEV, President of Kazakhstan, supported all initiatives aimed at restoring trust in international relations, and strengthening peace and security, based on international law.  For seven decades, the world had sought an effective formula to resolve conflict, yet disputes had only grown more sophisticated and complex, an evil that stemmed from destroyed statehood.  He urged shifting from “routine” conflict prevention and post-conflict rehabilitation to a new development strategy that rendered conflict “senseless”.

In that context, he proposed the creation of a 2045 global strategic initiative plan that would launch a new trend in global development — one based on fair conditions in which all nations had equal access to infrastructure, resources and markets.  For that purpose, he urged transforming the Economic and Social Council into a global development council, with States elected by the General Assembly and heads of all United Nations specialized agencies acting as a global economic regulator.  A draft “world anti-crisis plan” was under discussion at the Astana Economic Forum.

He said clear rules must be created for the trade of global reserve currencies, which today did not meet the criteria of justice, democracy, competitiveness and international control.  “Our world needs qualitatively new instruments,” he stressed, proposing the creation of a supranational currency that would be relevant for global prosperity.  On the security front, he proposed a universal declaration to achieve a world free of nuclear weapons.  As the first country to close a nuclear weapon test site, Kazakhstan had helped create a nuclear-weapon-free zone in Central Asia.  Such zones were needed in other regions, particularly the Middle East.  His Government had signed the agreement on the establishment of the International Atomic Energy Agency (IAEA) bank of low-enriched uranium in Kazakhstan, an important step that the world should acknowledge as safe use of the atom.

Finally, he said, the erosion of international law and weakening of global institutions was a dangerous challenge.  He cautioned against the arbitrary imposition of sanctions, which contravened the United Nations Charter and international law.  “The right to impose international sanctions that can damage the well-being of millions of people should remain the exclusive prerogative of the Security Council,” he said.  He advocated peaceful settlement of the Ukrainian crisis and full implementation of the Minsk agreements.  More broadly, he proposed establishing, under United Nations auspices, a global network to counter terrorism and extremism.  The “2045 global strategic initiative plan” could include a new future concept to define the goals of the next stage of human development.