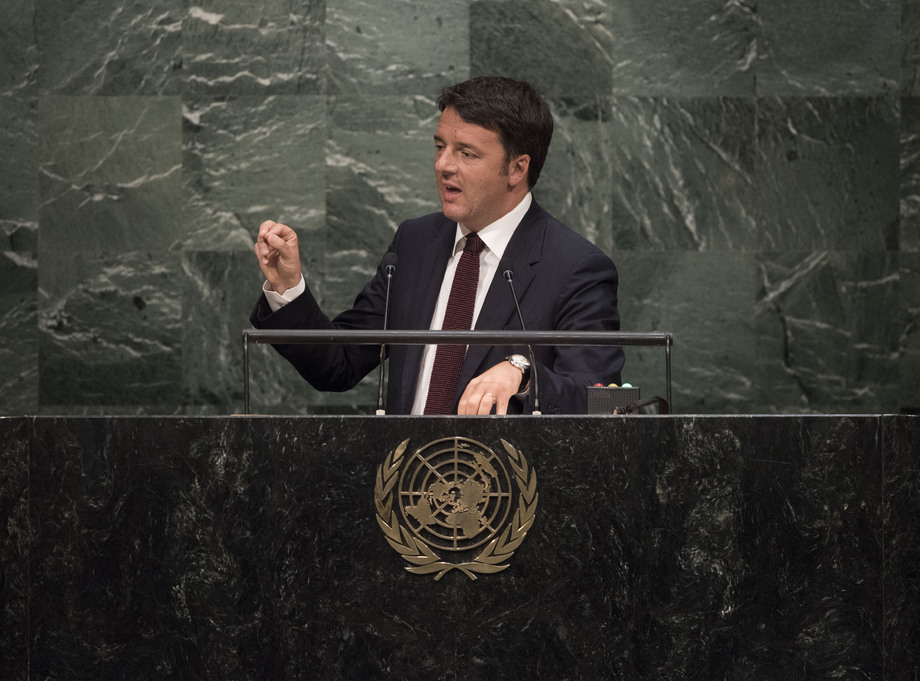 MATTEO RENZI, Prime Minister of Italy, said that he represented the voice of a generous people.  Public life in the world today was fixated on the present, and led by discussions on television, 24/7 news and social media.  He belonged to a generation that believed in the value of social media but it came with the risk of reducing the broad horizon to the next poll.  “We should reject the dictatorship of the instant,” he said.  On the map, his country was shaped like a bridge — between the North and South, Europe and Africa, East and West, extending from the Middle East to the Balkans.  Italy had always been an extraordinary cultural laboratory.

In the past 70 years, he said, Europe had left behind centuries of war.  As a young man who had witnessed the fall of the Berlin wall, he believed that Europe was born to tear down walls, not build them.  Italy was on the front line of rescuing thousands of migrants fleeing war. He had personally accompanied Secretary General Ban-Ki moon on a rescue ship.  At the age of 70, the Organization had the wisdom to recognize its mistakes and the strength to correct them.  Welcoming the nuclear deal with Iran, he said it had brought hope to the international community.  Only through dialogue and negotiations could the delicate Israel-Palestine question be addressed.

On Syria, he said, “we have all felt the failure of inertia”.  Italy was proud to be a leading country in the training of security forces in Iraq and had taken a primary role in the working group to counteract financing to Da’esh.  It also stood ready to collaborate with the new Libyan Government, if asked, and would be willing to take a leadership role in a mechanism to stabilise the country under the norms of international law.  “The terrorists want us to die”, he said and fear was the playground of terrorism.  When terrorists attacked schools or museums, they were not attacking the past, they were targeting the future.  It was in Italy where the culture of conservation was born, and it held the highest concentration of United Nations Educational, Scientific and Cultural Organization (UNESCO) heritage sites.  Proposing an international task force to rebuild historic sites; it could be deployed in the framework of peacekeeping.