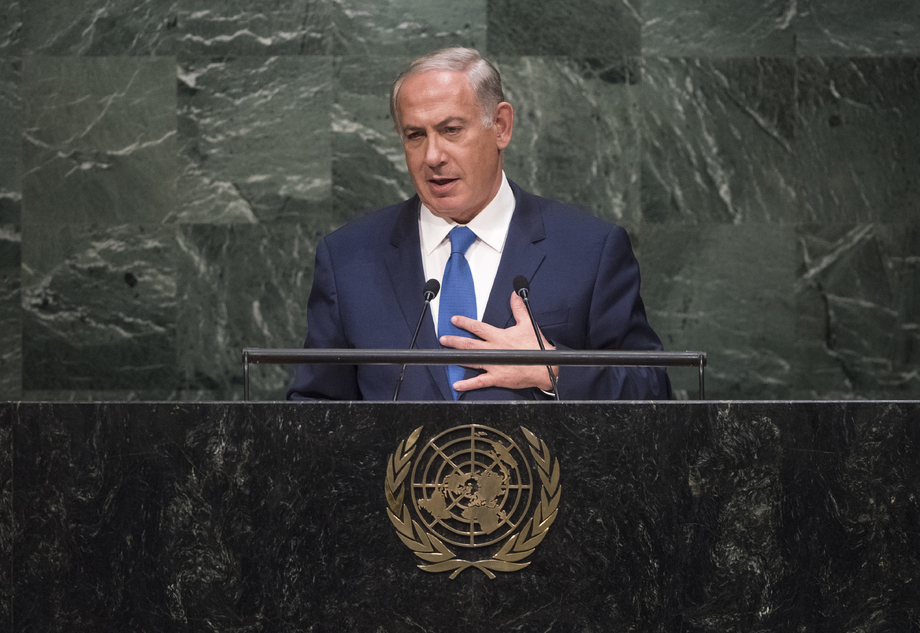 BENJAMIN NETANYAHU, Prime Minister of Israel, said that 31 years ago, as Israel’s ambassador, he had spoken at the United Nations against a resolution sponsored by Iran to expel his country from the Organization.  Then as now, the Organization was obsessively hostile to Israel, the one true democracy in the Middle East.  In that first speech, he had said: “check your fanaticism at the door” and now, more than three decades later as the Prime Minister of Israel, he was saying, in response to the international community’s praise for the nuclear deal with Iran: “check your enthusiasm at the door”.  That deal made war, not peace, more likely.

In the last six months, he continued, since the framework agreement had been announced, Iran had boosted its supply of weapons to Syria and sent thousands of Afghani and Pakistani Shiite fighters there to prop up President Assad’s regime.  Iran had shipped weapons to rebels in Yemen, and every week Iran and Hezbollah set up new terrorist cells in various countries, including in the northern hemisphere.  “Unleashed and unmuzzled, Iran would go on the prowl devouring more and more prey”, he said, adding that sanctions relief would not “turn this rapacious tiger into a kitten”.  President Rouhani had begun a “so-called charm offensive” at the United Nations two years ago and now Iran was rapidly expanding its global terrorist network.  But “giving the mullahs more money” would fuel more repression inside and outside Iran.

“Some well-intentioned people,” he added, believed that the deal would block Iran from getting weapons, but the best intentions would not block terrible outcomes.  “Make sure that the inspectors actually inspect”, and “make sure that Iran’s violations are not swept under the Persian rug”, he said.  Israel would never forget that the most important partner it had always had and would always have was the United States.  “President Obama and I agree on the need to keep arms out of the hands of terror proxies,” he said, expressing appreciation for President Obama’s willingness to help Israel maintain its qualitative military edge.  “Israel is the innovation nation,” he stressed, noting the country’s contributions to medicine, agriculture, biotechnology and other fields.

Israel was also committed to achieving peace with the Palestinians, he said, stressing that his country knew the price of war and could appreciate the blessings of peace.  “I am prepared to immediately resume direct peace negotiations with the Palestinian authority without any preconditions ever,” he said.  Unfortunately President Abbas had said yesterday that he was not prepared to do that.  Israel, however, remained committed to a vision of two States for two people in which a demilitarized Palestinian State recognized a Jewish State.  Despite the best efforts of six Israeli Prime Ministers, the Palestinians had refused to end the conflict and make a final peace.

“How can Israel make peace with a Palestinian party who refused to sit at the negotiating table?” he asked, calling on the Palestinians to not walk away from peace.  The leaders of the two countries owed it to their people to try for peace and the United Nations should support direct unconditional negotiations instead of imposing solutions or “encouraging Palestinian rejectionism”.  The Organization should also “check its anti-Israel fanaticism at the door”, and President Abbas should stop “spreading lies” about Israel’s intentions with the Temple Mount.  A thousand years before the birth of Christianity, and fifteen hundred years before that of Islam, King David had made Jerusalem “our capital” but Israel would respect the rights of all religions to sacred sites.