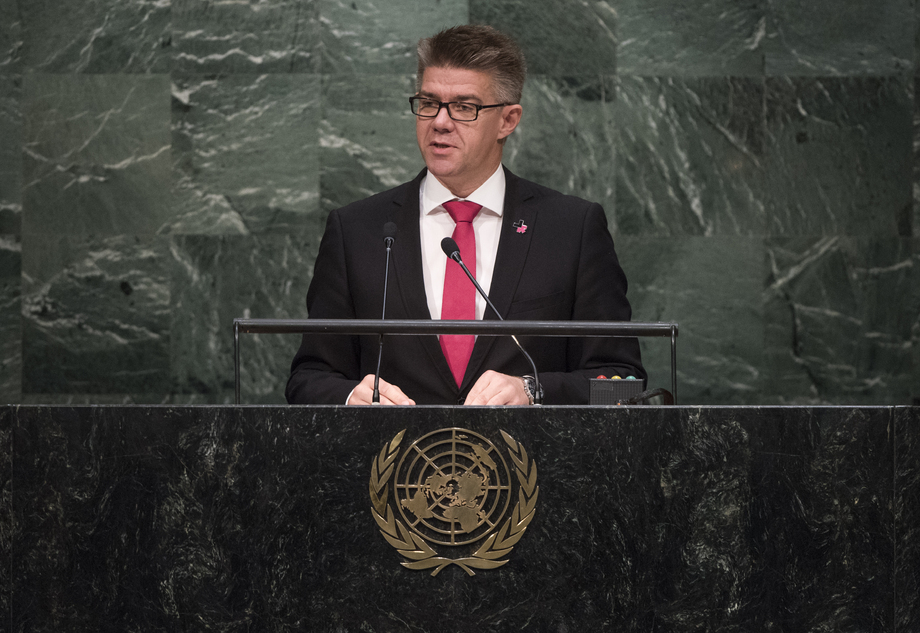 GUNNAR BRAGI SVEINSSON, Minister for Foreign Affairs and External Trade of Iceland, said that the world community should be proud of the 2030 Agenda and the Addis Ababa Action Agenda.  Praising Sustainable Goal 7 on affordable, reliable and sustainable modern energy for all, he said the aim should be the elimination of carbon fuel and the channelling of fossil fuel subsidies towards renewable energy resources.  Each State must contribute to such common goals.  Noting the fragility of the Arctic ecosystem, he reminded those present that temperatures there were increasing at more than twice the average global rate.  Shrinking glaciers in the North contributed to higher sea levels in the South.  The Climate Conference in Paris would be the last chance to get on track towards a sustainable future.  Along with other European countries, Iceland was committed to reduce greenhouse gasses by 40 per cent in 2030.

On other matters, he said that without peace and security there could be no sustainable development, but those were no justification to violate human rights, including death penalty use.  He called on Saudi Arabia to commute that sentence in the case of Ali Mohammed al-Nimr, who had been convicted when he was a minor.  Stressing the need for humane treatment of all minorities and the most vulnerable, including on the basis of sexual orientation and gender identity, he said “We the peoples” in the United Nations Charter included everyone.  Calling the current refugee crisis an “exodus”, he said the conflict in Syria had produced a scale of suffering that “we all hoped never to see again”.  The long-term solution was to resolve that and related conflicts by political means.  The Security Council must halt the bloodshed in Syria.  He also called for support of frontline institutions such as the Office of the United Nations High Commissioner for Refugees, the World Food Programme (WFP) and the United Nations Children’s Fund (UNICEF), to which Iceland was allocating $16 million.

He remained committed to the two-State solution for Israel and Palestine.  He expressed concern over the humanitarian situation of Palestinians, while at the same time, decried terrorist activities from certain elements among them.  He urged that Western Sahara and other disputed areas not be forgotten, noting that it was of grave concern when a permanent member of the Security Council undermined the territorial integrity of another State.  On organizational reform, he said that it was time for qualified female candidates to be considered for the position of Secretary-General as well as President of the General Assembly and supported an expansion of permanent and non-permanent seats on the Council.  He also supported the initiative by France and Mexico on regulating the veto and for the code of conduct on Council action against genocide and other crimes against humanity, drafted by the Accountability, Coherence, Transparency (ACT) group of States.