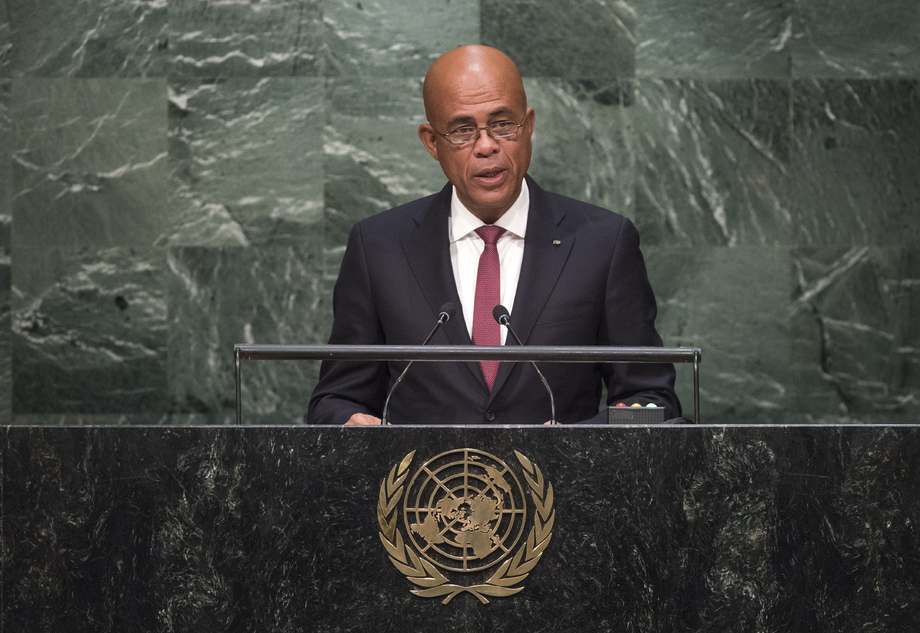 MICHEL JOSEPH MARTELLY, President of Haiti commended several recent events that highlighted progress in international relations, notably the re-establishment of diplomatic relations between Cuba and the United States, which would further secure peace in the hemisphere.  He also hailed the agreement between Iran and the P5+1 (China, France, Russian Federation, United Kingdom, United States and Germany), and voiced support for the prevailing dialogue among nations towards peace.

However, he stated, the Syrian conflict was an affront to the international conscience.  Non-State actors were expanding their reach, committing unbearable atrocities and destroying world heritage sites, particularly in Iraq and Syria.  All measures must be taken to oppose the barbarism of terrorist entities and the criminal behaviour, which threatened common values.  There would be no peace or security if there were no response to such actions.  Furthermore, there was no hope of meeting global challenges if the gap between North and South, and poverty were not addressed.  The United Nations could not maintain its credibility if its capacity to act rapidly in maintaining international peace and security, especially in crisis situations, to calm hotbeds of recurring tensions and to resolve conflicts of long duration was not strengthened.

On the domestic front, he noted that a process had been launched in August that would lead to elections at all levels.  Those elections would be an indicator of the success of United Nations Stabilization Mission in Haiti (MINUSTAH) over the last eleven years.  Institutions serving the rule of law and democracy had strengthened and security had been improved.  Detailing progress in reduction of extreme poverty, child health and foreign direct aid, among other areas, he pointed out that after decades of stagnation, the economy was growing, 1 million children were enrolled in school and there was greater access to clean water.  There had also been progress in the fight against AIDS/HIV and malaria.  Those successes could not have been achieved without MINUSTAH.  As the country entered a new phase, he said, the transfer of military and police matters should take place under clear guidelines.  A new defence force, created under a policy formulated with the Inter-American Defense Board, would participate in development, environmental protection, border security and protecting investments.  He expressed thanks to those United Nations entities that had been constantly by Haiti’s side.