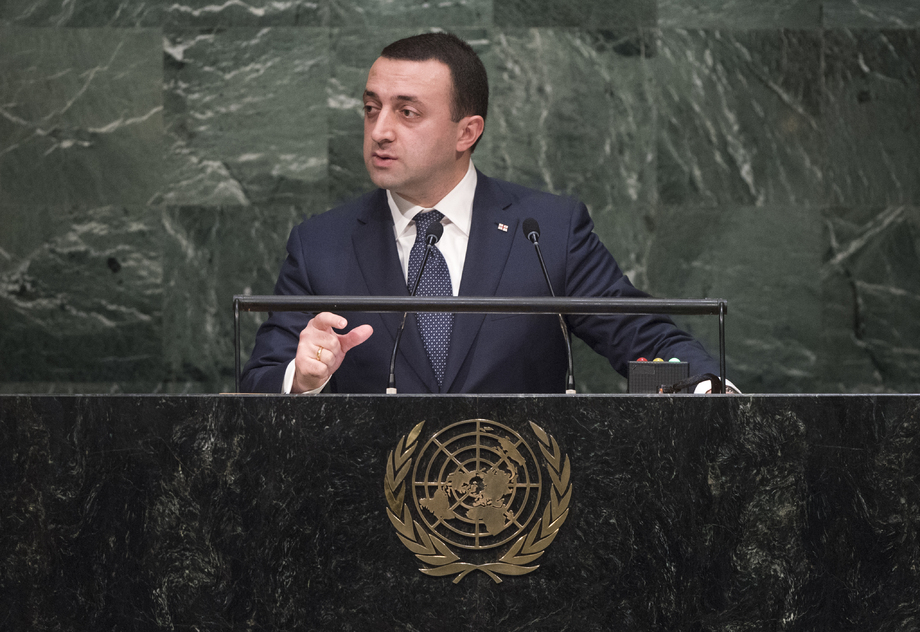 IRAKLI GARIBASHVILI, Prime Minister of Georgia, said that his country was a modern dynamic State today, in contrast to two decades ago when it was an isolated country torn by civil war.  European integration had proved to be a powerful incentive and Georgia had reached a milestone in June 2014 by signing an Association Agreement with the European Union.  The Government had made progress in every policy area with a national healthcare program and a system of governance that was more transparent than ever before.  Last year, Georgia had adopted its first comprehensive long-term human rights strategy.  Economic freedom remained the central pillar of the country’s development plan.

“Even with all these achievements, we still face challenges to our security at home,” he stated.  The Russian Federation had signed the “so-called integration treaties” with Sokhumi and Tskhinvali, continuing to illegally extend its control over Georgian territory.  Condemning the “creeping annexation,” he added that it had crushed not only basic rights but also the hopes of hundreds of thousands of victims of ethnic cleansing who only wished to return to their places of origin.  Recalling the annual general Assembly resolution on the status of internally displaced persons and refugees from Abkhazia, Georgia, and the Tskhinvali Region/South Ossetia, Georgia, he added that though his country had taken a number of concrete steps to advance trade and humanitarian contacts with the Russian Federation, relations could not be settled at the expense of Georgia’s sovereignty.

Last year, he continued, Georgia had announced its intention to establish a Silk Road Forum.  In a few weeks, the country would host that high-level forum in Tbilisi.  Georgia was located at a key crossroad, linking East and West, and reopening the Silk Road was an opportunity to ensure deeper economic and cultural ties between Asia and Europe.  Welcoming the nuclear agreement with Iran, he added that it would contribute greater security and economic development in the region.  Concluding, he set out his vision for a prosperous Georgia that leveraged its geographic location and was dedicated to facilitating peace among neighbors and commerce between continents.