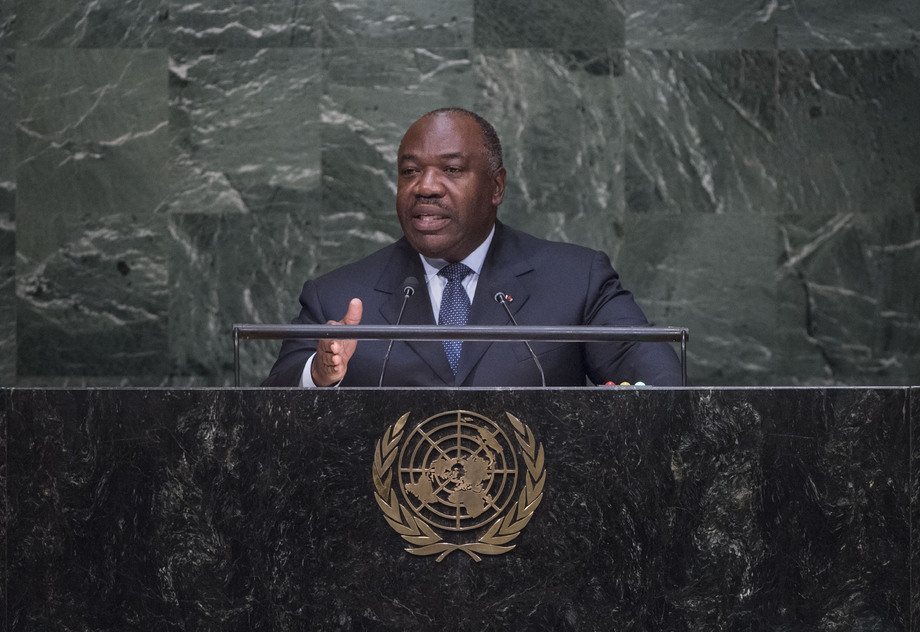 ALI BONGO ONDIMBA, President of Gabon, said that humanity faced numerous challenges, from economic crises to pandemics to threats against peace and security, and — 70 years after the establishment of the United Nations — the world’s peoples had pinned their hopes on the Organization more than ever before.  It was time to acknowledge the changing nature of the United Nations and its role in the management of international affairs.  Above and beyond all else, peace and international security remained under threat, and the Organization required restructuring to adapt to new international realities, such as terrorism, piracy and trafficking.

In Africa, he said, several crises continued:  the Central African Republic, in particular.  The situation in that country remained fragile and worrying, and the international community must redouble its efforts in inviting the stakeholders to become involved in the dialogue and not undermine efforts already made, especially in light of the upcoming elections.  Regarding Israel and Palestine, the United Nations needed to help restart the peace process, but the creation of a Palestinian State was the only possible way towards a sustainable peace.  Gabon welcomed the nuclear agreement with Iran, and only an international non‑proliferation treaty with respect of the right for peaceful nuclear development could nations solve the burning question of weapons of mass destruction.

In Africa, where terrorism had multiplied in the form of Boko Haram and Al-Shabaab, the monitoring of financial flows required strengthening as a means of effectively fighting that threat, he stressed.  Significant and undeniable progress had been achieved in the area of human rights, but further improvement was a pedagogical rather than political phenomenon.  Now was the time to translate talk of reform of the Security Council into meaningful action, and Gabon supported France’s proposal to expand the use of the veto.  In peacekeeping operations, new technologies had improved the connection between local populations and peacekeeping personnel, but in order to improve effectiveness, missions required predictable financing and a more robust mandate.  They needed the right to impose peace where the conditions did not exist, rather than to maintain a fragile peace through a ceasefire.

Finally, climate change posed another new challenge to the United Nations, and if it did not act today, the consequences would be devastating, he said.  Two months from the start of Paris, there was still no agreement on which nations could negotiate.  Member States must have the courage to overcome their difficulties — experts had found 2014 as the warmest year on record, and if nothing was done the temperature would increase as much as 5°C.  Africa and South America were the “two lungs of the world” with an important role to play.  The world had changed at a fast pace, and, if the United Nations was to play a role in solving the world’s problems, a new architecture must be reflected in the Organization.