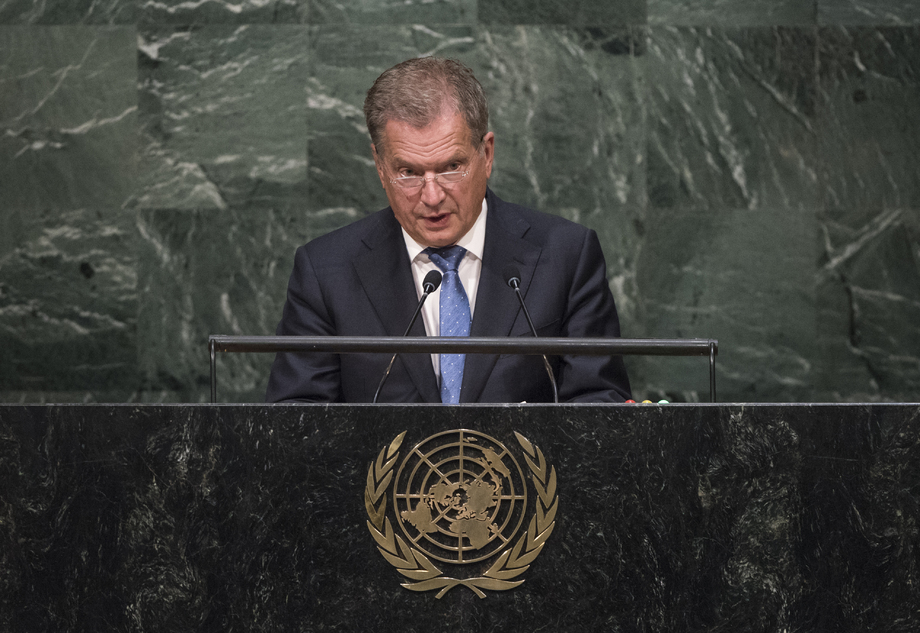 SAULI NIINISTO, President of Finland, noting that this year marked the sixtieth anniversary of his country’s membership in the United Nations, said that Finland had joined a family of countries, which shouldered their responsibility.  The crisis in Syria, Iraq and parts of North Africa posed an unprecedented humanitarian catastrophe that threatened the peace and stability in the Middle East, Africa and Europe.  Wars and conflicts such as those had given rise to a new era of migration evidenced by the approximately 60 million refugees — the largest since the Second World War.

He said his country was receiving proportionally a very high number of asylum seekers.  While not helping was not an option for Finland, more effective and sustainable ways to help those in need were critical.  The Security Council and countries in the region must work together to find a political solution to the Syrian situation.  He welcomed the steps taken towards the implementation of the Minsk agreement, underscoring that all illegal measures, like the annexation of Crimea by Russia, could not and must not be recognized.

Despite the United Nations’ peace operations, the scope and complexity of today’s violent conflicts had surpassed the world community’s ability to address them properly.  In that regard, he welcomed Ramos-Horta’s High-Level Panel report and said his country would continue to advance that body’s recommendations.  Finland had contributed 50,000 men and women to United Nations peacekeeping operations.  In per capita terms, that was the number two contributor in Europe and Finland would further strengthen its contribution.

“We cannot continue business as usual […] It is up to us to act.  We can choose — or lose — our future,” he said.  To implement the ambitious 2030 Agenda, it was necessary to “get everybody on board” to make the commitments a reality.  Similarly, the Climate Change Conference in Paris must be made a success for the sake of all children.  On other matters of interest to his country, he welcomed efforts to enhance the transparency and inclusiveness of the selection process of the Secretary-General; the country championed gender equality, and expected to see many excellent female candidates for the position.  “It was high time that the other half of humankind took up this challenge,” he said.