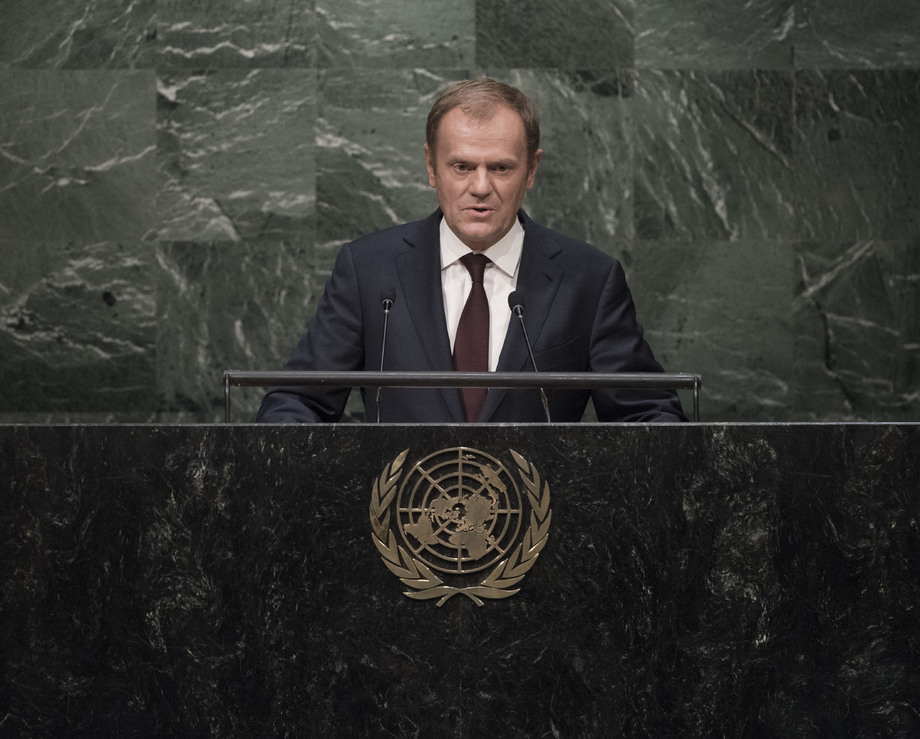 DONALD TUSK, President of the European Council of the European Union, said Europe was as committed as ever to its values, even as it confronted unprecedented challenges.  It borders were being challenged as it dealt with the refugee and migrant crisis, as well as economic problems.  Yet Europe would cope with all, and it remained dedicated to make the world a better place.  Regarding the flow of migrants and refugees to Europe, he said it was not true that Europe was the only rich place on earth.  There were other regions of wealth in the world.  At the same time, wealth was not the only factor people considered when choosing their future; they made decisions based on human rights, freedom and civil rights, all of which attracted people to Europe.

He said Europe wanted to be fair in any discussions on quotas for immigration, whereas many countries represented here were not letting migrants into their countries at all.  It was sheer hypocrisy to criticize Europe.  No one was escaping from there.  The refugee crisis had global dimensions and demanded a global response.  People should not criticize Europe for not doing enough on the refugee situation.

Syria’s crisis must be resolved, he went on.  Millions of Syrians were being impacted.  The fight against terrorism was very important, and the international community could not overlook the fact that many refugees were fleeing terrorism.  Stability could not be achieved by directing bombs against civilians.  It would be wrong to make Bashar al-Assad part of a transition government.  The peace plan for Syria should let people begin to live a normal life in the region, which would be consistent with the values of the international community and the United Nations.

This year was also crucial in the fight of climate change, and Europe was determined that the Paris summit at the end of the year would be a breakthrough, he said.  Fighting climate change was not a global competition and everyone had to take part in the global effort.  Global challenges must be managed on a multilateral basis or they could not be dealt with at all.