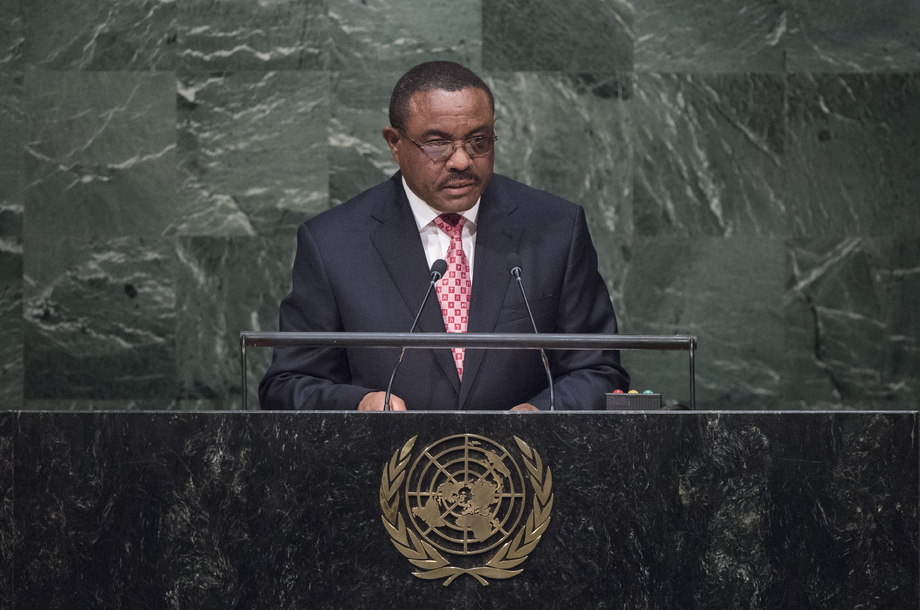 HAILEMARIAM DESSALEGN, Prime Minister of Ethiopia, said the political will and commitment demonstrated in adopting the Addis Ababa Action Agenda and the 2030 Agenda gave hope and optimism that a new globally binding climate agreement could be secured under the auspices of the United Nations during the Climate Change Conference in Paris in December.  Although his country, one of the United Nations’ founding members, had not been able to count much in its hour of need on the League of Nations’ support, it had never lost confidence in multilateralism and remained a staunch supporter of the principle of collective security embodied in the Charter.

Based on that conviction, his country had actively contributed to the advancement of the Organization’s principles and purposes, he said.  Today, it was the second largest contributor to United Nations peacekeeping.  However, United Nations achievements were a far cry from the “Herculean” challenges it faced today.  While its “very many failures”, especially in the areas of peace and security, could not be overlooked, the United Nations remained an organization that no one could afford to live without, for it remained the only universal organization that provided all nations, regardless of their size or wealth, a unique platform to advance common objectives and address the myriad problems they collectively faced.

As for how the Organization could be made more relevant and effective, he said it was up to Member States to empower it to fulfil its promises in a new era.  Not only had the Organization’s membership changed dramatically over the years, but so had the world’s geopolitical and economic realities.  While the need to reform the Organization had long been recognized, forging the necessary compromise among the wider membership had not been easy, but could not be further delayed.  It was not enough to adopt the next generation of Goals; the United Nations must be made fit for the post-2015 era.

Noting that comprehensive reform of the United Nations, and of the Council in particular, was imperative, he repeated Africa’s call for full representation in all of the Organization’s decision-making organs.  Expressing gratitude for the United Nations’ support of his country’s development efforts, he said Ethiopia had been able to achieve remarkable progress, including most if not all of the Millennium Development Goals, because it took charge of its own destiny and made best use of its partnership with the United Nations.  It would continue to work towards achieving middle-income status by 2023, based on carbon-neutral growth and a climate-resilient green economy strategy.