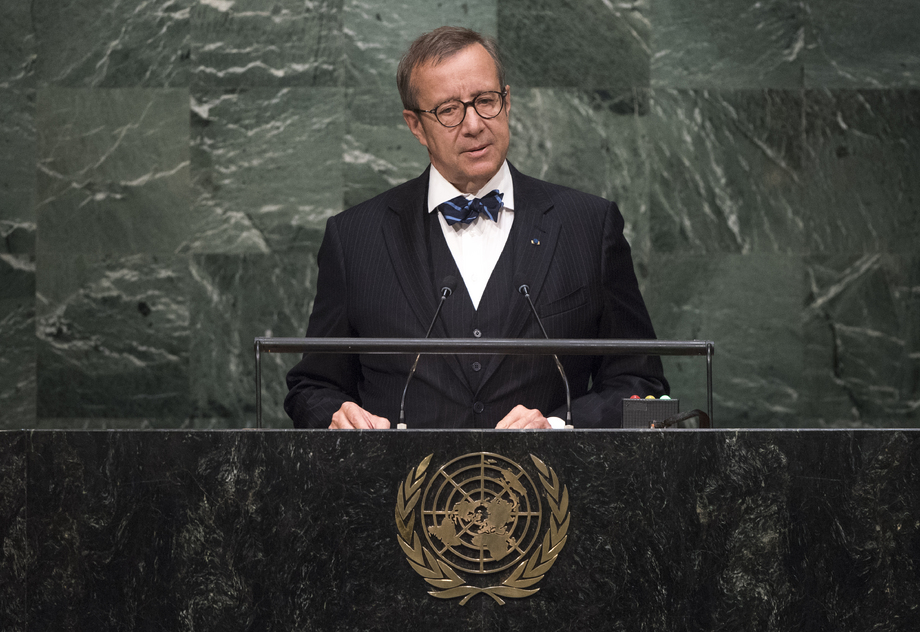 TOOMAS HENDRIK ILVES, President of Estonia, said that as the international community continued to tackle global challenges including terrorism, climate change, poverty and human rights violations, the number of conflicts and crises worldwide continued to grow.  Expressing hope that the recent agreement on Iran’s nuclear programme would pave the way for more stability in the Middle East, he stressed that ISIL posed a serious threat to peace and security in Syria, and that his country supported the international coalition against ISIL.  The United Nations and its Global Counter-Terrorism Forum also had an important role to play.  The ongoing conflicts and crises in Syria and Libya, among other places, had led to the current refugee crisis in Europe.  Some 42,000 people worldwide fled from their homes every day.

Meanwhile, the civil war in Syria alone had created more than 4 million refugees, he said.  The majority of those people had sought refuge in neighbouring countries, but many had opted to take the dangerous route across the Mediterranean to get to Europe.  There were 600,000 asylum-seekers in Europe in 2014, and there would be far more in 2015.  “I am extremely worried to witness the rising support for far right or far left political movements in Europe, often fuelled by anti-immigrant, racist sentiments,” he said, adding that short-sighted, populist policies exploiting fears of ordinary people would lead nowhere.  The European Union was the main donor in the effort to alleviate the Syrian refugee crisis, having mobilized approximately €4 billion in humanitarian, development, economic and stabilization assistance to Syrian internally displaced persons and refugees.

Not only did the world have to bring peace and stability to Syria and Libya, but it also had to put an end to the aggression against Ukraine, he said.  Compared to a year ago, the armed conflict there was less intense, but daily fighting continued.  Crimea remained illegally occupied, and those responsible for the downing of Malaysian airliner MH17 were still at large.  Attempts to obstruct justice on that matter were deeply disturbing.  In addition, long-standing protracted conflicts in Georgia, Moldova and the Nagorno-Karabakh region remained unresolved.  Dialogue and diplomatic efforts to find a solution to the conflict between the Russian Federation and Ukraine must continue.  A solution to the conflict, however, must not come at the expense of the principles that underpinned European and global security.

The year 2015 was a crucial one for action against poverty and for promoting sustainable development, he said.  The Climate Conference in Paris should reach an agreement that promoted the goal of economic growth, which did not come at the expense of the environment.  He stressed that all Member States had committed to protect their people from genocide, war crimes, ethnic cleansing and crimes against humanity.  Unfortunately, in the cases of Syria and Ukraine, the Security Council had failed to act due to the use of the veto.  Council members must not vote against actions aimed at preventing and stopping mass atrocity crimes, he stressed in that regard.  Estonia therefore supported the initiatives of France and Mexico on the non-use of veto in such cases.