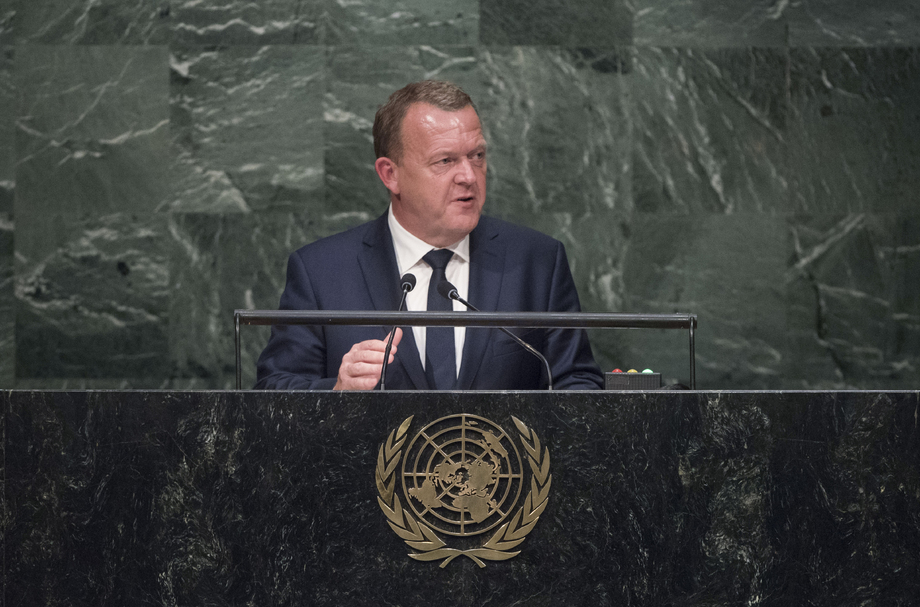 Lars Løkke Rasmussen, Prime Minister of Denmark, said 70 years ago the Organization was born from the ashes of the Second World War with the vision of a future that would be better than the past.  It was committed to solve common problems through dialogue.  Much progress had been made since then.  The world was wealthier, the number of armed conflicts between nations had declined, and many infectious diseases had been eliminated.  Yet conflict remained the biggest threat to human development, human rights were routinely violated and the planet was under stress.  It remained a complex world.

In Denmark’s view, one of the priorities for the United Nations was peace and security, said the Danish President.  A historic moment occurred in 1989, when the Berlin Wall came down and the Iron Curtain disappeared.  Yet cooperation and dialogue had been replaced by force and violence.  In Ukraine, there had been an unacceptable violation of international law.  In Syria, civilians suffered horrific abuses committed by terrorists and ISIS.  A strong unified response was needed to confront violent terrorists in Syria and Iraq and parts of Africa.  Denmark planned to increase its contribution to United Nations peacekeeping efforts.  At the same time, migration flows were surging as people were fleeing their homes.  There was an international responsibility to help those people.  Denmark took that responsibility very seriously.  The world needed more than peacekeeping troops.  It needed a Security Council that would take the necessary decisions and address conflicts in a timely manner.

Mass migration was a global challenge, and inclusive growth had to be a goal, he said.  Member States and other nations had to do their part.  Denmark would continue to meet its ODA commitments and would increase its humanitarian aid to address the mass migration in Europe.  He called on all States to increase their contribution in that area.  Human rights and gender equality were another priority for the United Nations.  The best way to build a better world was to unleash the potential of all people.  Denmark had always pursued an active human rights policy and women were key drivers to ensure sustainable development.  Denmark was also engaged in the global fight against torture.  It was totally committed to upholding the core values of the United Nations, and to advance human rights and fundamental freedoms.

Another priority for the international community was implementing the climate change agreement and effectively addressing climate change, he said.  It was necessary to act through national policies and financial support.  The Sustainable Development Goals carried a multi-trillion dollar price tag.  The Goals needed the support of all actors, including the public and private sectors and civil society groups.  The need for an effective United Nations was greater than ever, and Denmark had been one of its strongest supporters.  That fact would not change.  The United Nations anniversary was an opportunity to set ambitious goals.  “We had to show our grandchildren that we could deliver on our promises, today, tomorrow and 70 years from now,” the Danish Prime Minister said.