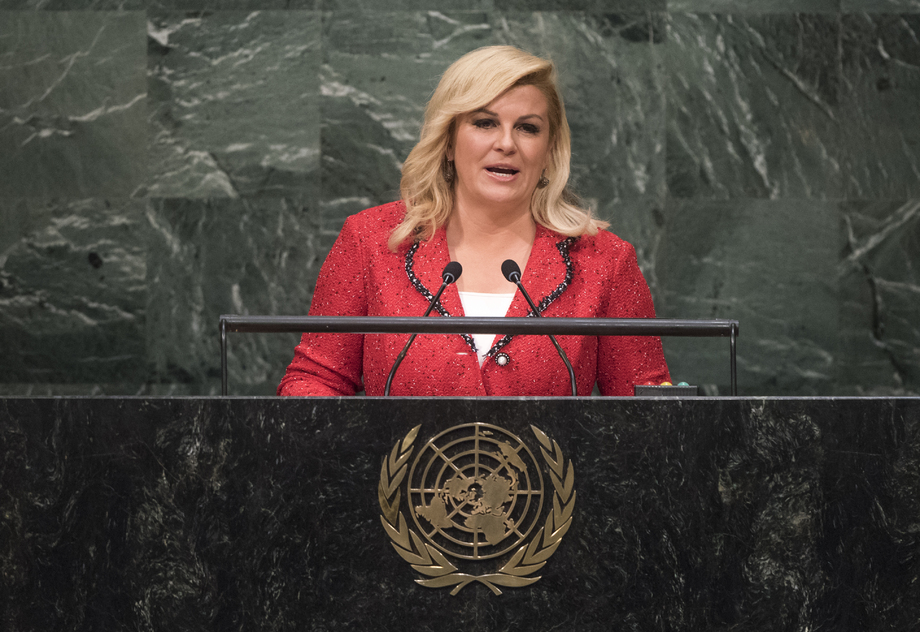 KOLINDA GRABAR-KITAROVIĆ, President of Croatia, said that while the challenge of migration was nothing new, now 60 million people were on the move worldwide and there was a lack of clear guidelines and comprehensive policies.  “We need sound legal, social, economic, humanitarian and logistical solutions,” she said.  The current migrant crisis was a multidimensional problem that required multilateral solutions.  Nearly 80,000 people had entered Croatia since mid-September and it had joined a line of European Union and South-Eastern European countries that had been heavily burdened by the crisis.  The most difficult task had been finding the right balance between national, regional and global perspectives.  Croatia asked for consensus within the European Union and a global response.  “I ask that we focus on the rule of law, the conventions that we signed” at the end of the Second World War, she added.

It was important to educate children, the future generations, to work harder at achieving global citizenship and to build on the United Nations idea of a global classroom, such as the Global Education Initiative, in which Croatia was proud to be a champion country.  Legislation was not enough.  “We need a change in mindset and behaviour that is only possible through education,” she added.  Croatia welcomed the work of the High-Level Independent Panel on Peace Operations and their review of United Nations peacekeeping operations.  Croatia hoped the delivered report would provide guidance for increasing the effectiveness of the United Nations peacekeeping operations as a key mechanism for ensuring global peace and stability.

The uncontrolled spread of conventional weapons was another significant threat and Croatia had been proud to preside over the First Review Conference to the Convention on Cluster Munitions, which continued to pose threats long after a conflict ended, in Dubrovnik, a city that had suffered attacks from those weapons.  Pleased to note the results of the Iranian nuclear programme negotiations, she expected the global community would learn to what extent it would contribute to the stabilization of the Middle East and beyond.  The world needed to stand together to mobilize its efforts to fight the Islamic State in Iraq and the Levant/Sham (ISIL/ISIS), or Da’esh, and all forms of intolerance and discrimination.  There was no development without security and no real security without justice and human rights, rule of law and good governance.  On the European continent, peace had to be implemented in the Ukraine, with respect of the ceasefire and the Minsk peace plan.  Croatia remained committed to Ukraine’s sovereignty, independence and territorial integrity, she said, stressing the importance of the stability of South-East Europe.