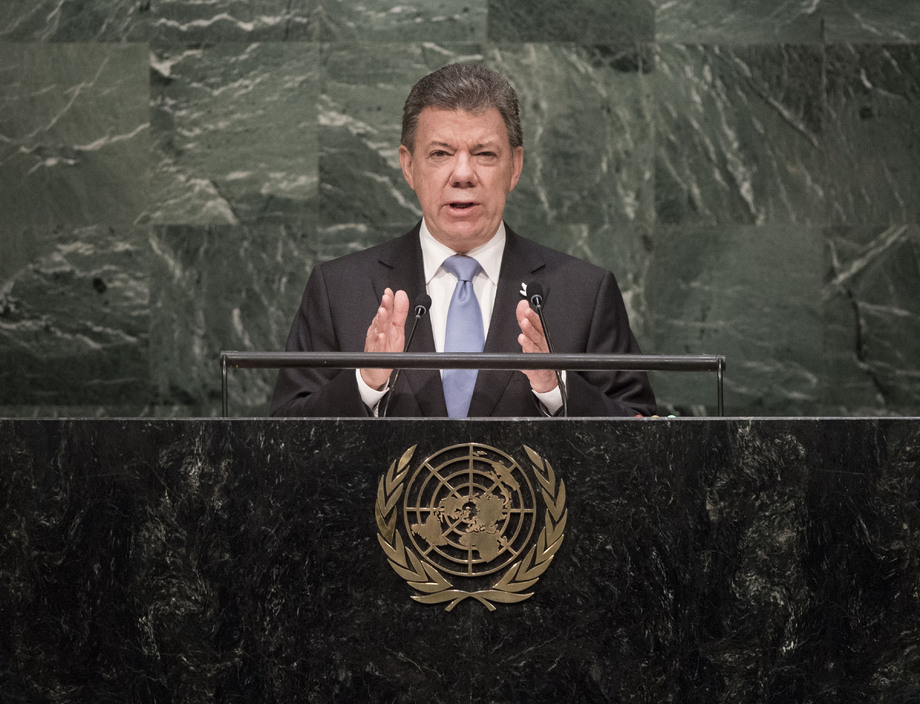 JUAN MANUEL SANTOS, President of Colombia, said he had come to the United Nations, an organization dedicated to peace, security and human rights, to announce that Colombia was on its own path to peace.  In a world in which there were more than 20 armed conflicts taking place, he was proud to announce that the conflict in Colombia was on the final path to a genuine solution.  Colombia had put an end to the longest armed conflict in the Western Hemisphere.  Using courage and responsibility, Colombia had ended more than 50 years of internal warfare.  Peace was a difficult path, but Colombia was dedicated to it.  Peace “required that every person inside opens their mind and heart and soul to reconciliation,” he added.

He said he had come to the Assembly with optimism because less than a week ago, in Havana, Cuba, following three years of negotiations, Colombia had reached an agreement on the most significant obstacle to peace in the country.  The accord laid down a system of transitional justice to ensure that there was no impunity for the perpetrators of the crimes.  The system respected the principles of international and national law.  “Our goal was maximum justice, which would allow us to move to peace,” he said.  The agreement set out an accountability system in the form of a national court for crimes.  The system could serve as a precedent for other armed conflicts in the world.  Significantly, a deadline for the signing of a final agreement by 23 March 2016 had been set.  In addition, the Revolutionary Armed Forces of Colombia, known as FARC, would begin to lay down its arms no later than 60 days after the signing.  He could return to the Assembly next year representing a Government in peace.

On behalf of 48 million Colombians, he thanked the international community for its efforts.  A Colombia at peace would help the country deal with global challenges, such as climate change and the eradication of extreme poverty.  Colombia was the most biodiverse country, for its size, and it was extremely vulnerable to changes in climate.  It insisted on the environmental elements of the Sustainable Development Goals.  He strongly supported the upcoming climate meeting in Paris.  Peace would let Colombia achieve the Goals as its people would have more economic opportunities.  Peace was the supreme good of any society and the reason for the United Nations.  “In Colombia, in less than six months, the bells will ring out that the time of peace has come,” said the President.  He hoped that the clocks around the world would be synchronized at the same time.