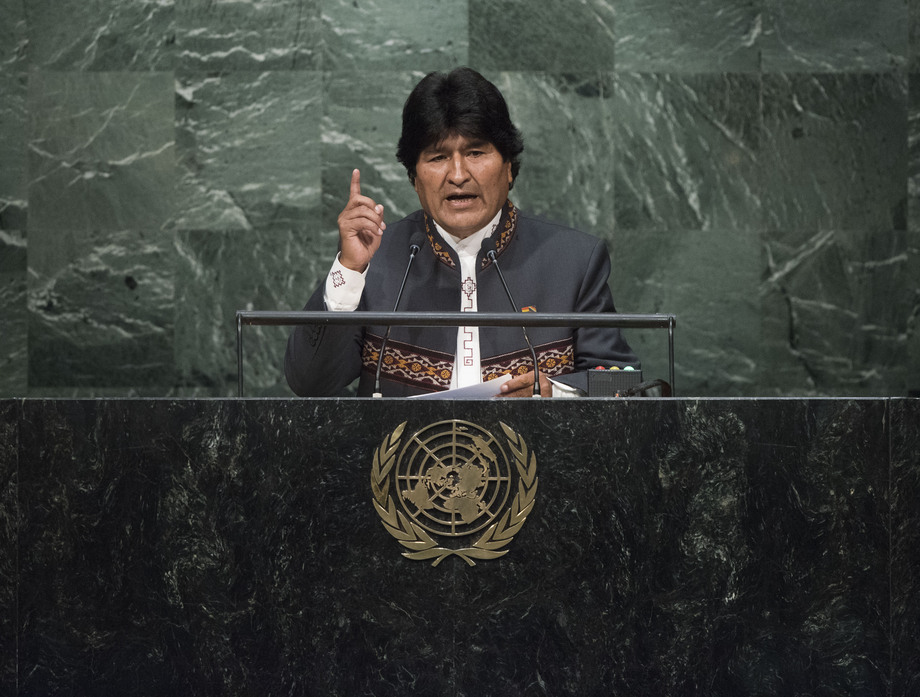 EVO MORALES AYMA, President of Bolivia, said it was important to take deep stock of the political, social, cultural and environmental achievements of the United Nations since its founding.  It had been 70 years, yet wars and invasions continued, and the origin of that violence was the ambitions of certain regions and nations, and the policy of keeping capital in the hands of the few, where oligarchies dominated.  Therefore, the goals of peace and stability in the world had not been obtained.  All said they sought peace, but there could be no peace without social justice.  In those seven decades, capitalism had failed and had only brought about a humanitarian, financial, food and energy crisis.  Nearly half the inhabitants of the world still suffered from hunger, and millions upon millions of dollars had been spent to destroy Mother Earth.

How much money was spent on military conflicts that could be spent to save the environment, and what had caused the ills for the people of Libya and Syria, he asked.  Muammar al-Qadhafi was overthrown and called a tyrant.  The target was not really him but the oil that belonged to the Libyan people, who were now on their knees with their resources in the hands of a few Americans and transnationals: “that was capitalism for you.”  Trying to live better than others was the synthesis of capitalism; living well, in solidarity and complementarity, as one with Mother Earth, was socialism.  Water, light, telecommunications and other services were considered a human right in Bolivia and should never be privatized or owned by foreigners or transnationals.  Natural resources were so important when it came to economic health, and that was why Bolivia had freed itself economically.  “Do not believe in capitalism,” which merely concentrated capital into the hands of the few, he said.  The world had a huge responsibility at the Paris Climate Change Summit in December.  Future generations would hold the present generation responsible and would be anti-capitalists.

Social movements sought unity for integration, not policies of invasion for domination, he said.  There were different kinds of democracy — that of the transnationals and that of social movements.  True democracy was not governed by businesses, and financing Democrats and Republicans both wasn’t democracy; that was capitalism.  There were now “soft coups” and espionage, and that was why he did not share those policies.

On migration, he said that migrants were being criminalized and expelled.  Europeans had invaded the Americas 500 years ago and then implemented policies to exterminate the indigenous peoples and pillage natural resources.  Now, however, people travelled to the United States and Europe and they were criminalized, persecuted and expelled.  For that reason he proposed to work together to create universal citizenship, since people had the right to live wherever they liked in the world.  Globalization should not just be for trade or money, but for all human beings.  Bolivia would never expel anyone.  He refuted comments by United States officials that Bolivia could not have diplomatic relations with Iran, Cuba and Venezuela.  No one could tell Bolivia with which countries it could have diplomatic ties.  Now, the United States had diplomatic relations with Iran and Cuba, so perhaps in the future it would have diplomatic relations with Venezuela as well.  In closing, he commended the messages of peace from Pope Francis, who said he “did not believe in money”, which had made President Morales believe in him.