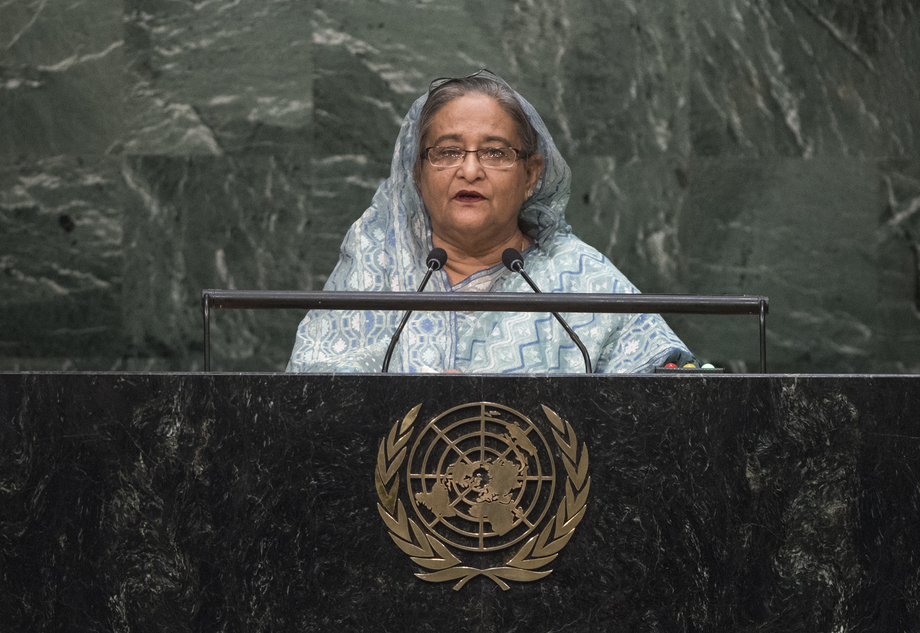 SHEIKH HASINA, Prime Minister of Bangladesh, said that terrorism remained a major impediment to global peace.  She was a victim of terrorism herself, with the brutal assassination of her family in 1975, and her Government maintained a zero-tolerance policy to all forms for violent extremism.  The other formidable development challenge was climate change and regional cooperation was critical to fostering sustainable development as well as achieving peaceful societies.  Bangladesh had taken a leading role in building regional cooperation processes and was working to develop infrastructures to enhance trade and people-to-people contact among Bangladesh, Bhutan, India and Nepal.

Over the years, she continued, peacekeeping and peacebuilding had emerged as flagship activities of the United Nations and her country was proud to be associated with those endeavours as a leading troop contributor.  In its development efforts and in engagement in global affairs, Bangladesh was guided by the vision of a global order based on peaceful coexistence, social justice and freedom from poverty and aggression.  Today, Bangladesh was widely recognized as a role model for the developing world.  With one of the fastest poverty reduction rates in the world despite a modest resource base, the country was on track to meet six Millennium Development Goals.

As with the Millennium Development Goals, she added, Bangladesh wished to lead by example with the implementation of the Sustainable Development Goals.  The country was currently developing the next five-year development plan, for 2016-2020, and her Government was determined to ensure that no one was left behind.  Committed to upholding the rule of law and ending a culture of impunity, Bangladesh was pursuing the culprits of war crimes, crimes against humanity, rape and genocide committed during the 1971 Liberation War.  The country had also recently settled the maritime and land boundary demarcation-related issues with neighbours, India and Myanmar, she said, urging the nations of the world to renew the collective resolve to free the world from oppression and injustice.