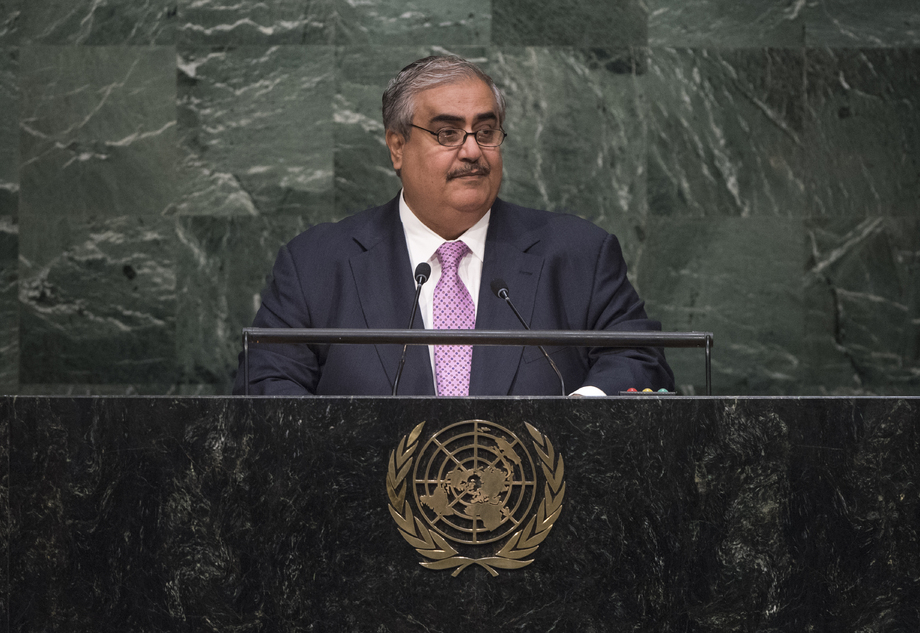 KHALID BIN AHMED BIN MOHAMMED AL KHALIFA, Foreign Minister of Bahrain, said that his country was classified in the United Nations Human Development Index as having very high human development, having scored a 5 per cent growth rate in the last five years.  The International Telecommunication Union had conferred its Sustainable Development Award for 2015 on the country’s Prime Minister.  He stressed the role of environment in sustainable development and the importance of joint action to address climate change in the hope that the Climate Conference in Paris would reach a binding and ambitious agreement, particularly on repercussions to small island developing States.

Turning to Iran, he advised the country not to squander its people’s resources to promote vested interests, but rather to use them to achieve development and progress and to build bridges with its neighbours.  However, Iran, he said, had responded in an “evil manner” and so Bahrain was left with no option but to recall its Ambassador to Iran, in an effort to protect its own people and interests.  Concerning Yemen, he urged those who had taken up arms there to lay them down, and called on all factions to enter into national dialogue on the basis of the Gulf Cooperation Council (GCC) initiative and implementation mechanism.  As Syria went down a “treacherous and slippery slope”, Bahrain called for an end to the situation and a return of that country to its previous condition of unity, harmony, security and stability.  Foreign military intervention must cease and an agreed political settlement, consistent with the Geneva communique, must be reached.  On the humanitarian front, he noted that Gulf Cooperation States were hosting 3 million Syrian “brothers and sisters” granting them all rights, from free education and health care to the right to work and a decent life.

Condemning terrorism in all its forms, he said it could only be stopped through collective efforts at all levels, including its sources of financing.  The illegal and inhumane acts by Israeli authorities and extremist groups against the Al-Aqsa Mosque compound could destroy any chance of peace.  While affirming the importance of the agreement on Iran, he said it did not eliminate all sources of tension resulting from that country’s attitude towards others in the region.  In that context, he affirmed the importance of a nuclear-weapon-free zone in the Middle East, including the Arabian Gulf region, stressing the need for Israel to adhere to the Nuclear-Non-Proliferation Treaty (NPT) and place its facilities under comprehensive International Atomic Energy Agency (IAEA) safeguards.  Confronted by daunting challenges, he said Middle East States needed to reflect deeply on how to create a mechanism for collective action, with a view to consolidating security and stability.