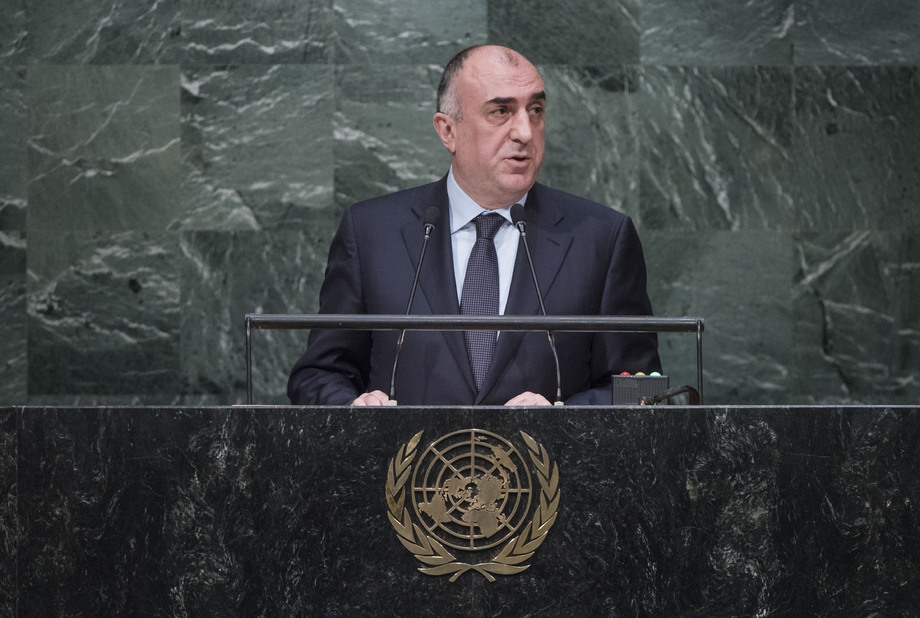 ELMAR MAMMADYAROV, Minister for Foreign Affairs of Azerbaijan, condemned terrorism, violent extremism and separatism in all their forms and manifestations.  In situations of armed conflict or political crisis involving inter-State relations, no solution could be reached which was inconsistent with international law and legal order, particularly where fundamental norms — such as the obligation to respect sovereignty, territorial integrity and the inviolability of the internationally recognized borders of States — were concerned.  He expressed deep concern over the unfolding refugee crisis fuelled by armed conflicts in the Middle East and Africa; he was equally alarmed by increased cases of religious intolerance, particularly Islamophobia, and attempts to associate religions with terrorism.

Describing his country’s concrete contributions to the United Nations, in particular its peacekeeping operations, as well as his country’s “impressive” results on many Millennium Development Goal targets, he went on to say that Azerbaijan was adapting its national strategies to the new Sustainable Development Goals.  On Tuesday, the President of Armenia had delivered a statement before the Assembly, which was “full of usual falsifications, distortions and misinterpretations”.  That President had attempted to lecture others about principles and values which in reality his Government disregarded and opposed.  The international community could recall the brutal massacres by invading Armenian troops of Azerbaijani citizens, as well as the establishment of the military dictatorship in Armenia after murdering the entire political elite of the country.

He said it was well known that Armenia had unleashed the war and used force against Azerbaijan, occupied almost one fifth of its territory, including the Nagorno-Karabakh region, carried out ethnic cleansing and seized areas by expelling some one million Azerbaijanis from their homes.  Recalling Security Council resolutions that had condemned that occupation, he said the Council had also, in those documents, confirmed that the Nagorno-Karabakh region was part of Azerbaijan.  Other international organizations had adopted similar positions.  While Armenia even boasted that his country was one of the most militarized in the world, that country’s speculations on confidence-building measures were “curious”, to say the least.  In fact, the real reasons for the lack of confidence were Armenia’s overt territorial claims to neighbouring countries and aggression against Azerbaijan.

In order to effectively build confidence, it was critical to implement without further delay the plan of withdrawal of the armed forces of Armenia from the occupied territories of Azerbaijan, he said.  His country would never be reconciled with the seizure of its territories.  The conflict could only be resolved on the basis of the sovereignty and territorial integrity of Azerbaijan within its internationally recognized borders.  If negotiations failed to bring as an outcome the complete and unconditional withdrawal, Azerbaijan would be compelled to use its inherent right of self-defence guaranteed under Article 51 of the Charter.

Also exercising the right of reply, the representative of Azerbaijan said of Armenia that the country was not one to speak on human rights considering half of its population had none.  He said the United Nations and other organizations had recognized the legitimate right of Azerbaijan to its territories.  Armenia was one of the only countries in the world that venerated terrorists.  Azerbaijan had long pressed for an investigation into crimes against humanity and other violations of international law.  It would be in the best interest of Armenia’s people if its Government put an end to aggression and worked towards the prosperity of its own population and region.

Also taking the floor again, the representative of Azerbaijan said the second statement by Armenia was full of outright lies.  Armenia’s population could not be called “multi-ethnic”; in fact, its “monoethnicity” had been achieved through ethnic cleansing.  It would be more appropriate if the representative of Armenia did not misinterpret the peace process.  Further, it would be in the best interest of Armenia and the international community if it stopped the illegal use of force against Azerbaijan and resumed good neighbourly relations.