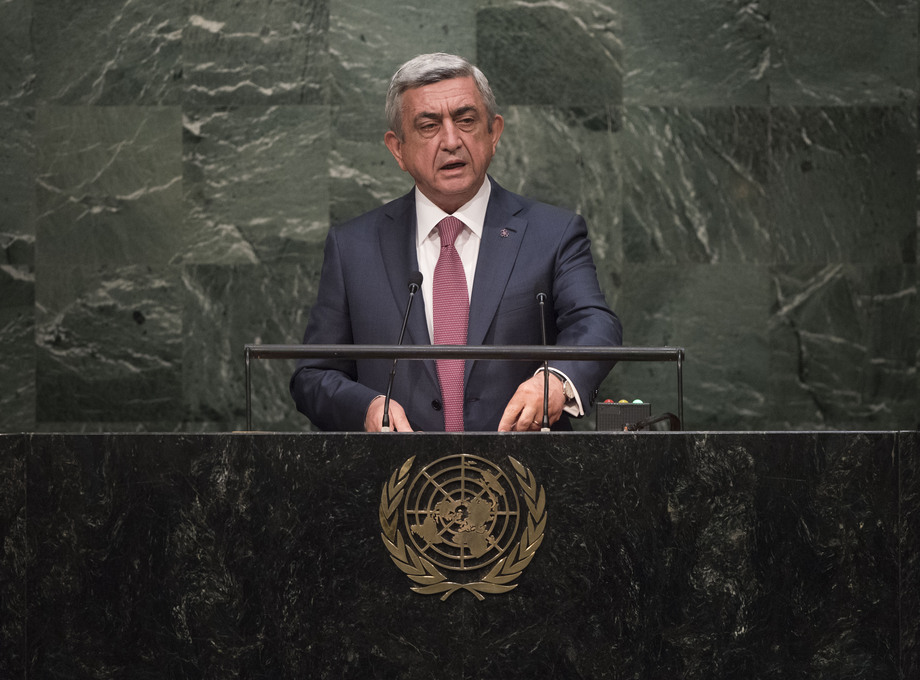 SERZH SARGSYAN, President of Armenia, recalled the 2014 centennial of the Armenian genocide and expressed gratitude to those countries that recognized it.  Armenia was determined to keep prevention of genocide on the international agenda.  He also noted the resolution passed recently by the Assembly establishing 9 December as “the International Day of Commemoration and Dignity of the Victims of the Crime of Genocide and of the Prevention of this Crime”.

He said the peaceful resolution of the “Nagorno-Karabakh problem” was one of the most salient for the region, and noted that Azerbaijan’s “aggressive policy” had prevented any meaningful progress in negotiations as the situation “drifted” towards increased tensions.  He drew attention to Azerbaijan’s firing of large calibre artillery at peaceful settlements on the borders of both his country and Nagorno-Karabakh, killing three women a few days prior.

Decrying Azerbaijan’s “disdain” for the joint statement by the Presidents of the United States, Russian Federation and France and the efforts of the Organization for Security and Co-operation in Europe (OSCE) Minsk Group, he said that should that country’s actions continue, Armenia would have to take legal and political-military steps to enable his country and Nagorno-Karabakh to develop in peace and security.  He enumerated instances of ceasefire violations, and said it was obvious why his country had urged the international community to be unambiguous in its statements as to who was violating the ceasefire.  Otherwise, he said, the “muffling of the early warning signals of threats” to peace and security could have catastrophic repercussions.

As witness to the “unspeakable cruelty” occurring in the Middle East, he noted the destruction of Armenian artefacts and expulsion of Armenians from Iraq and Syria.  Armenia had received 16,000 refugees from Syria, one of the largest numbers in Europe.  He also spoke of how joint and adequate actions had led to the historic agreement on Iran’s nuclear programme, demonstrating that where there was political will it was possible to find solutions for the most complicated issues.  He stressed the importance of eliminating closed borders.  The blockade of Armenia by its neighbours was unacceptable, and established artificial obstacles that disrupted intercultural, human-to-human trade and contacts.  He expressed high regard for the periodic review carried out under the United Nations Conferences on Landlocked Developing Countries, and stood ready to invest further efforts in that endeavour.

Also taking the floor in exercise of the right of reply was the representative of Armenia, who said he had felt “déjà vu” today as he heard the same allegations from the representative of Azerbaijan.  The statement delivered by that country was from a fairy tale; everything was upside down.  Azerbaijan had a problem with short memory, but the Minister himself was old enough to remember what had really happened.  Any journalists or bloggers that were willing to write the truth were imprisoned in Azerbaijan.  That State had also refused to have a meeting with the Committee of Missing Persons for the past 10 years.  “Don’t threaten us with the possibility of war,” he said, stressing the need for peaceful dialogue.  Hundreds of Azerbaijani citizens were fighting as ISIL fighters.  They did not allow international observers along the border to see who was responsible for violations of the ceasefire.  Nagorno-Karabakh would never be part of Azerbaijan.  To the representative of Turkey, he asked about the people’s right to self-determination and said that no one could determine their status without taking that principle into account.

Taking the floor a second time, the representative of Armenia said it was difficult to argue against words that made no sense.  He called upon the presidency of the Assembly to interrupt meetings where States were levelling baseless allegations.  He represented a country that was home to 12 national minorities who lived happily and had all the rights and privileges of all citizens.  With the collapse of the Soviet Union, Nagorno-Karabakh had been able to declare its independence.  The only international organization that had the right to mediate among the parties was the Organization for Security and Co-operation in Europe (OSCE) Minsk Group, which was working hard to find a resolution to the conflict.