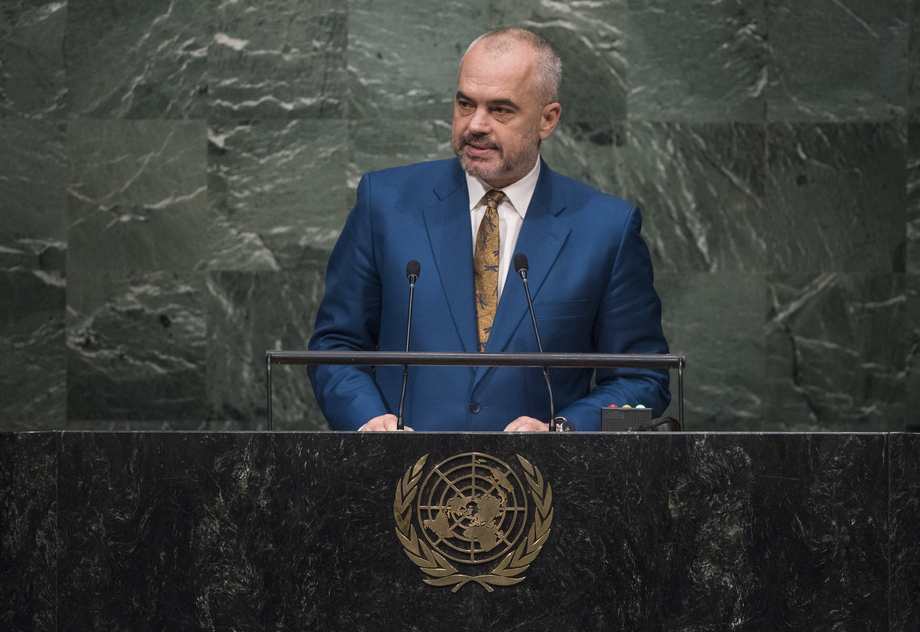 EDI RAMA, Prime Minister of Albania, said that when the Pope had visited his country, he had called it a “religious fraternity” due to its diverse cultures living together in peace.  At a time when religious extremism, violence and terrorism were causing an exodus of biblical proportions, bringing refugees to the doorsteps of countries in his region he hoped to show that another way forward was possible.  Last year, for the first time in a century, no peoples in the Balkans were pointing guns at each other.  The talks between Serbia and Kosovo had enabled them to find solutions to a series of issues for the benefit of the region and their people.  He called on those States that had not done so to recognize Kosovo, as that would enhance the region’s stability and be good for Serbia as well.  His visit to Serbia last year was the first by an Albanian Prime Minister in 68 years.  Inspired by the youth exchanges between France and Germany following the Second World War, Albania and Serbia were now establishing such exchanges.

Countries large and small should come together to put a better future for the young at heart, he said.  Albania would include a charter of values found in the Sustainable Development Goals in its new school curriculum.  Such measures would be effective if everyone played a part.  In an era facing such serious challenges, he said the future should be ensured by teaching the young the value of tolerance.  Noting that Winston Churchill had said that only words remained forever, he called for tolerance and respect for diversity to be put in “black and white” as well as recognition that the common humanity shared by all should be taught in schools.  While words would not eliminate violence and intolerance in and of themselves, if the young were shown the right way they would take it.  “Let us show them that men, women and all peoples of the world were joined by their common humanity, no matter the language, religion, colour or nationality.”

Also speaking in exercise of the right of reply, the representative of Albania said that Kosovo was an independent State recognized by 110 countries, and was a member of regional initiatives in South-Eastern Europe.  Since its independence in 2008, Kosovo had strengthened its geopolitical identity, and had contributed to peace and stability in the region.  Furthermore, Kosovo and Serbia were looking for common solutions.  With Kosovo’s independence, the region had closed the bitterest chapter in its recent history.