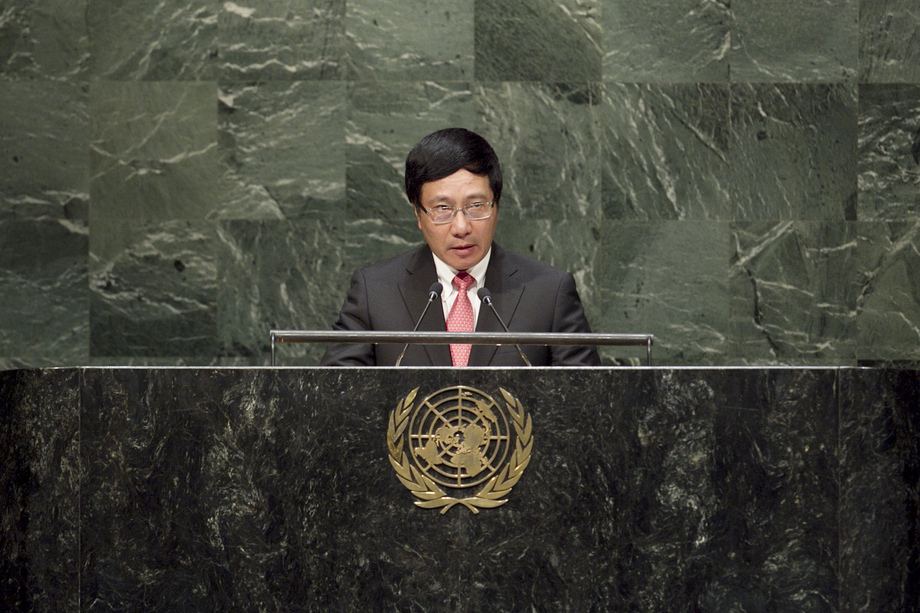 PHAM BINH MINH, Deputy Prime Minister of Viet Nam, said peace and security were prerequisites for sustainable development, and establishing it was an urgent task that required long-term engagement.  Respect for international law was the foundation of peace, security and stability for sustainability.  All nations should renounce the use of force as an option in international relations and settle disputes by peaceful means.  In that context, he looked forward to substantive progress in peace negotiations on the Middle East, recognizing the fundamental national rights of the Palestinian people, and noting his concern over escalating violence in Iraq.  Condemning all acts of terror, he criticized unilateral economic sanctions against developing countries, such as Cuba.

Calling for completion of the Millennium Development Goals by their target date, he said the post-2015 development agenda should add momentum to sustainable development in each country and encourage economic linkages.  More United Nations actions and resources should be brought to bear to address social injustices and inequalities and stronger support was needed for regional and subregional programmes on issues like connectivity, poverty reduction, and the green economy.  The United Nations had to adapt itself to a changing world through accelerated reform, particularly of the Security Council’s membership and working methods.

He was committed to resolving the East Sea (South China Sea) issue peacefully, abiding by the Declaration on the Conduct of Parties in the South China Sea and working for early adoption of the Code of Conduct of Parties in the South China Sea.  He supported strengthening multilateral trade, welcoming efforts to enhance economic links and to reform global trade governance for better equality, democracy, transparency and efficiency.  Work continued to establish an ASEAN community with common rules and norms and cooperation on economic, political-security, and sociocultural matters.  Viet Nam participated in the Human Rights Council and United Nations peacekeeping in South Sudan, and was a candidate for membership of the Economic and Social Council and the Security Council.