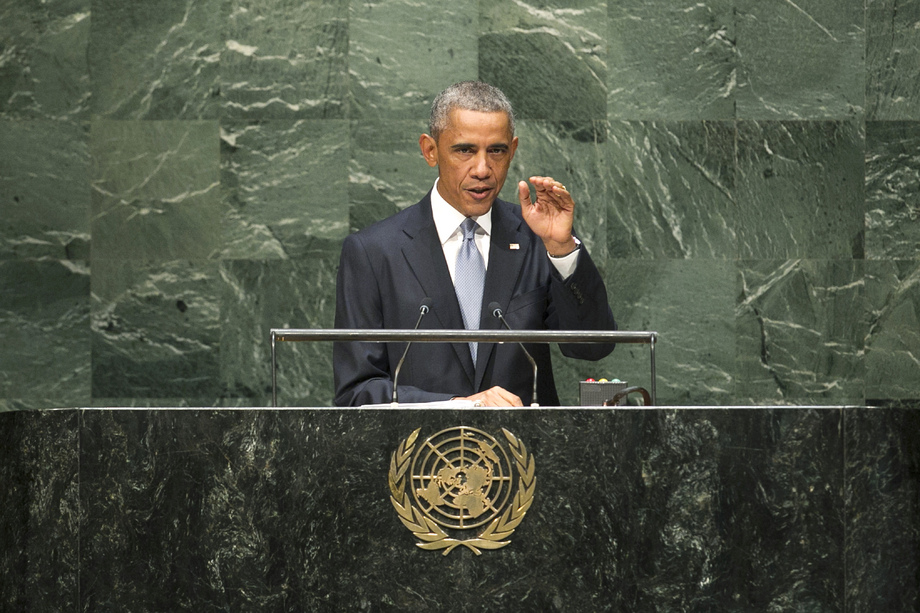 BARACK OBAMA, President of the United States, said that the international community had come together "at a crossroads between war and peace, between disorder and integration, between fear and hope". There were signposts of progress worldwide. The shadow of world war that had existed at the founding of the United Nations had been lifted, and the prospect of war between major Powers had declined. More people lived under Governments they elected, and hundreds of millions of human beings had been freed from poverty, with the proportion of those living in extreme poverty cut in half. The world’s economy continued to strengthen after its worst financial crisis, and indeed, now was the best time in human history to be born, as people were more likely than ever to become literate, healthy, and free to pursue dreams.

"And yet," he said, “there is a pervasive unease in the world — a sense that the very forces that have brought us together have created new dangers." It was difficult for any single nation to insulate itself from global challenges, including the outbreak of Ebola in West Africa and the Russian Federation's aggression in Europe. Those problems demanded urgent attention, but too often, Governments failed to enforce global norms when it was inconvenient to do so.

He said that there were two defining questions at the root of many global challenges — whether the nations here today would be able to renew the purpose of the United Nations’ founding, and whether they would together reject the “cancer” of violent extremism. All nations, big or small, must meet their responsibility to observe and enforce international norms. Russia’s actions in Ukraine challenged the post-war order. That country believed that "might makes right", in a world in which one nation’s borders could be redrawn by another, and civilized people were not allowed to recover the remains of their loved ones in a plane crash because of the truth it might expose.

America believed that "right makes might", he declared, adding that a different path was available — the path of diplomacy and peace. If the Russian Federation took that path — one that for stretches of the post-cold war period resulted in prosperity for the Russian people — then sanctions could be lifted. In past years, the two sides had been able to reduce their nuclear stockpiles under the Nuclear Non-Proliferation Treaty and cooperate to remove and destroy Syria’s declared chemical weapons. That was the kind of cooperation the United States was prepared to pursue again if the Russian Federation changed course. America was also pursuing a diplomatic resolution to the Iranian nuclear issue, he said, stressing that it was possible to reach a solution that met Iran's energy needs. The United States was also committed to a development agenda that eradicated extreme poverty by 2030, and was pursuing ambitious reductions in its carbon emissions.

Turning to the violent extremism ravaging so many parts of the Muslim world, he quoted President John F. Kennedy: “Terror is not a new weapon. Throughout history it has been used by those who could not prevail, either by persuasion or example.” America had waged a focused campaign against Al-Qaida and its associates. At the same time, the United States was not and never would be at war with Islam. That religion taught peace. There was a need to take concrete steps to address the danger posed by religiously motivated fanatics. The terrorist group known as “ISIL” must be degraded and ultimately destroyed, as it had terrorized all whom they encountered in Iraq and Syria. Mothers, sisters and daughters had been subjected to rape and innocent children gunned down. The United States did not intend to send its troops to occupy foreign lands. Instead, it would support Iraqis and Syrians fighting to reclaim their communities. It would use its military might in a campaign of air strikes to roll back ISIL. Muslim communities must explicitly, forcefully and consistently reject the ideology of Al-Qaida and ISIL, which would wilt and die with consistent exposure and confrontation in the light of day.

The Security Council would today adopt a resolution that underscored the responsibility of States to counter violent extremism, he said. But resolutions must be followed by tangible commitments. Next year, Member States should be prepared to identify the concrete steps they had taken to counter extremist ideologies. The cycle of conflict — especially sectarian conflict — must be ended as no one was winning that fight. A brutal civil war in Syria had already killed nearly 200,000 people and displaced millions more. Iraq had come close to plunging back into the abyss. Together with partners, America was training and equipping the Syrian opposition to counter ISIL terrorists and the brutality of the regime of Bashar al-Assad. However, the only lasting solution to Syria’s civil war was political: an inclusive transition of administration that responded to the legitimate aspirations of all citizens, regardless of ethnicity or creed.

The countries of the Arab and Muslim world must focus on the extraordinary potential of their people, especially the youth, he continued. To those young people, he said: "You come from a great tradition that stands for education, not ignorance; innovation, not destruction; the dignity of life, not murder." Where women were full participants in politics and the economy, societies were more likely to succeed. Such positive change need not come at the expense of tradition and faith. Ultimately, the task of rejecting sectarianism and extremism was a generational one for the people of the Middle East themselves. No external Power could bring about a transformation of hearts and minds, but America would be a respectful and constructive partner. On the conflict between Palestinians and Israelis, he said, "the status quo in the West Bank and Gaza is not sustainable." He stood up for the principle that Israelis, Palestinians, the region and the world would be more just with two States living side by side, in peace and security.

America’s critics, Mr. Obama said, would be quick to point out that his country had plenty of problems within its own borders. That was true. It had its own racial and ethnic tensions. But America welcomed the scrutiny of the world; it was a country that had steadily worked to address its problems and made its union more perfect. America was not the same as it was 100 years ago, 50 years ago, or even a decade ago because it fought for its ideals; because it was willing to criticize itself, held leaders accountable, and insisted on a free press and independent judiciary; and because it addressed differences in the open space of democracy with respect for the rule of law.