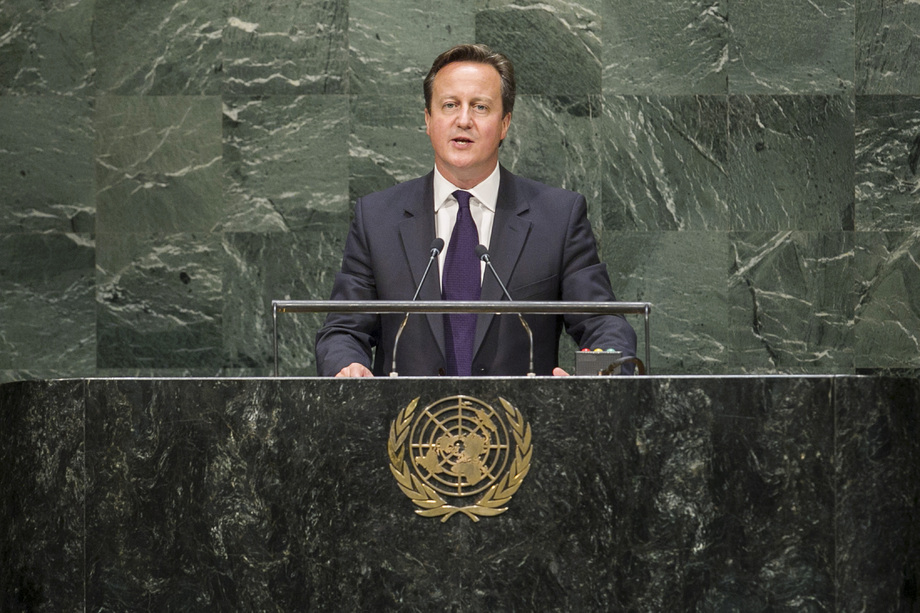 DAVID CAMERON, Prime Minister of the United Kingdom, took note of the extraordinary “tests of our values and our resolve”, in Ukraine, in the Middle East and in dealing with the Ebola outbreak, but primarily, the threat from ISIL.  That problem was not restricted to just one region, but affected all and must be tackled together.  Past mistakes were no excuse for indifference or inaction, he said, recognizing that not a single person in the Hall would view the challenge without reference to the past, whether in Iraq or Afghanistan.  Lessons must be learned from the past, especially from what had happened in Iraq 10 years ago, but the right lessons must be learned, namely to act, but to act differently.

Defeating Islamist extremism, he continued, required a comprehensive plan.  The problem had nothing to do with Islam, which was a peaceful religion that inspired countless acts of generosity, he said.  To defeat the extremist ideology, however, all its forms, including incitement to hatred and intolerance, must be addressed.  Muslims and their Governments worldwide must reclaim their religion, and young people needed programmes that would channel them away from poisonous dialogues.  To that end, he called for a new Special Representative on extremism at the United Nations.  The world community should also be intelligent, supporting accountable Governments and showing young people other ways of reaching their aspirations.  He called for the widest-possible coalition of countries in the region and around the world, including Iran, to be involved in that global effort to defeat extremism.  “And we should be uncompromising — using all the means at our disposal, including military force, to hunt down these extremists.”

His delegation, he said, had tabled a resolution in the Security Council to disrupt financial flows to ISIL, to sanction those seeking to recruit to ISIL and to encourage countries to do everything possible to prevent foreign fighters from joining the extremist cause.  Regarding the military, he said he did not think the threat would be best solved by Western ground troops directly trying to pacify or reconstruct Middle Eastern or African countries.  However, the military could support humanitarian efforts.  He urged that more be done to build the capability of legitimate authorities fighting extremists, whether by training equipping and advising, as well as providing technology and other assets necessary for success.  “We are facing an evil against which the whole world must unite,” he said.