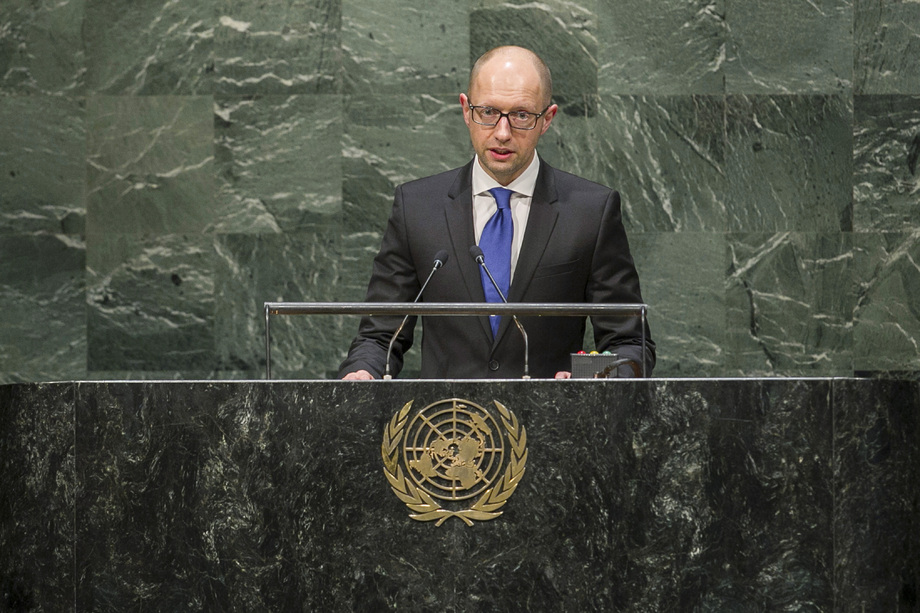 ARSENIY YATSENYUK, Prime Minister of Ukraine, stating that peace and stability did not exist in the world today, said that his country knew what terrorism was; not in words, but in practice.  The conflict in Ukraine was not domestic.  Ukraine had differences as every country did and it was ready to tackle its differences.  But, the origin of the conflict was an invasion by the Russian Federation.  “A ‘P5’ member violated the United Nations Charter.  That was “absolutely and entirely unacceptable”, he said.

Twenty years ago, he went on to say, Ukraine had abandoned its nuclear arsenal, the third largest in the world at the time.  In return, it was guaranteed territorial integrity and sovereignty.  The Russian Federation signed the memorandum to that effect; yet, it’d broken that promise.  “We are committed to our nuclear non-proliferation programme, but we need guarantees of territorial integrity, security and independence,” he said.

Pointing to the Russian Federation’s annexation of Crimea a few months ago, he commended Member States that supported the United Nations resolution on Ukraine’s territorial integrity and condemned the Russian Federation’s actions.  Today, Russian troops were deployed in eastern Ukraine and that Government had violated several multilateral and bilateral agreements.  He urged the Russian Federation to pull out its forces and to start real talks.  “We are the country that needs peace.  It’s difficult to hammer out any kind of peace deal at the barrel of a gun made in Russia,” he said.

He mourned the victims of the Malaysian Airliner downed a few months ago, and urged everyone to help Ukraine bring to justice those responsible for “this despicable crime against humanity”.  Every day, despite the ceasefire, Ukraine was losing soldiers and civilians.  His country needed peace.  The military option was not the best option, he said, calling for a comprehensive diplomatic and political solution.  Sanctions were the way to start real talks and hammer out a peace deal.  “We have no trust in words.  We trust only deeds and actions,” he said.