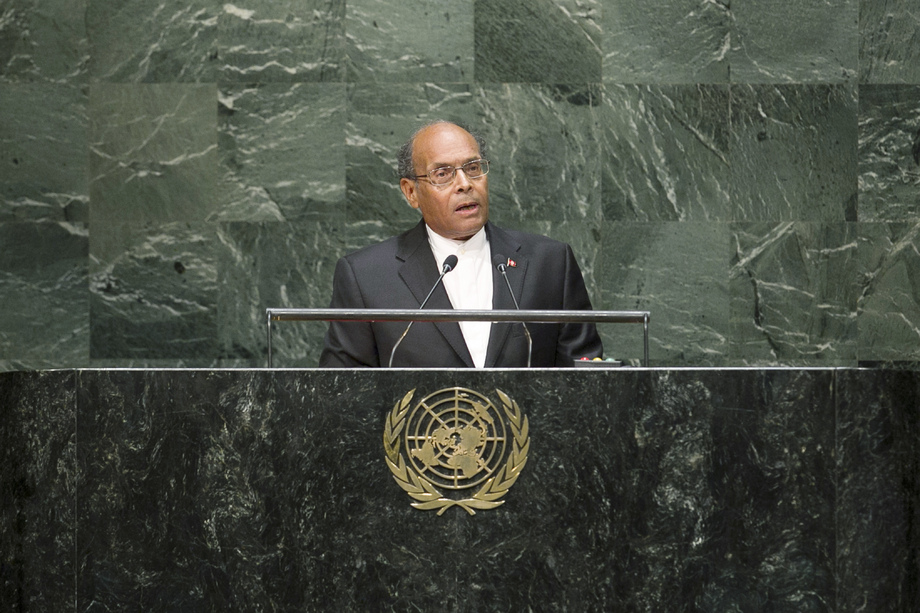 MOHAMED MONCEF MARZOUKI, President of Tunisia, said that his country had managed to eliminate a dictatorial regime and begin rebuilding a democratic State through a process of national dialogue. Tunisia today was a testing ground for sharing authority between secular moderates and Islamists, and was meeting counterrevolution with a response of moderation.

The volatile situation in neighbouring Libya was of great concern, he noted. Tunisia was "appalled" by violence against Christians in the region, and ashamed of acts committed in the name of Allah, who had defined himself as compassionate and merciful. Nothing justified the violence that had reached horrific levels, he said, condemning the execution of British and French nationals. What the world was witnessing today was the sum of five decades of despotic policies that had denied rights and freedoms while amassing wealth.

The world needed regimes that govern in harmony with their people, the release of all political prisoners, dialogue with all moderates, and an economy that favoured the interests of the majority, he said. Education that developed minds and "raised the banner of freedom" was also key. Some major Powers had for decades supported despotism in his country under the pretext of supporting stability.

Turning to the situation in other countries, he called for a lifting of the blockade on Gaza, and also for improvement of the situation in Syria. On United Nations reform, he called for an expansion of the number of permanent members of the Security Council to better reflect the world as it was today, not as it was at the conclusion of the Second World War. He praised the work of the International Criminal Court and then announced that his country would propose to the United Nations legal organ the creation of an international constitutional court that would be able to issue decisions on "illegitimate, bogus elections". This idea had been well-received in international academic forums, he said, expressing wishes that the creation of this court would not take as much time as creating the Criminal Court had taken.