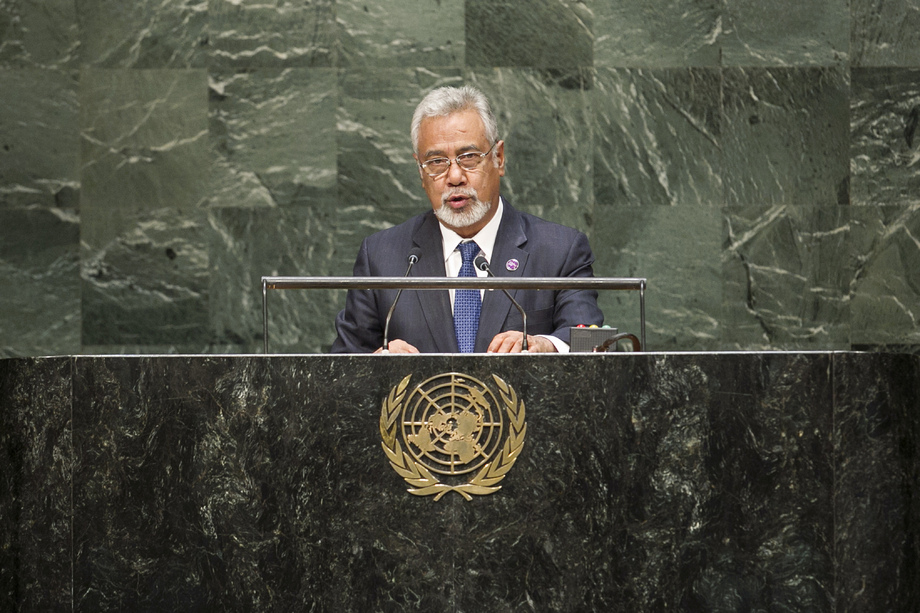 KAY RALA XANANA GUSMÃO, Prime Minister of Timor-Leste, said that despite high hopes, the Millennium Development Goals had not delivered for fragile and conflict-affected countries.  The challenges facing those countries had only worsened along with the increase in conflicts around the world.  The United Nations had failed to achieve positive results, leading to an increased loss of trust and a crisis of values.

More than anything, it was important to understand the root causes of those issues, he said.  When faced with a threat that jeopardizes peace, it was vital to understand the interdependency of the issues in order to reach a consensus.  The use of military force would not establish universal values or build democracies.  As things stood, we were “sliding off into the darkness of war”, upholding outdated principles of an eye for an eye, tooth for a tooth, he said.  Collective efforts to preserve world peace and security must reject the actions of large Powers motivated by strategic interests.  The international community should prioritize mechanisms for resolving issues related to the exclusion, discrimination and marginalization of disadvantaged groups.

Having witnessed the near destruction of its country, Timor-Leste knew all too well the consequences of war, he said.  Instead of feeding hatred and vengeance, his country nurtured solidarity and tolerance, providing the foundation for political peace and a genuine reconciliation with Indonesia.  The country’s partnership with the United Nations in rebuilding had taught it important lessons, which it had shared with the world, particularly fragile States.  Timor-Leste was a part of the g7+ group of conflict-afflicted countries that sought to place their needs onto the global development agenda.

He voiced concern by the developments in the east and south of the China Sea.  That issue was of vital importance to Timor-Leste, and there was a pressing need to set maritime borders between countries in a clear manner and in line with international law.  Timor-Leste wanted to continue to believe in sovereign rights and international mechanisms such as the United Nations Convention on the Law of the Sea, but it was weary of the intentions of big, multinationals that acted with “dishonesty and bad faith when dealing with poor countries”.  International conventions would be vital to rebuilding trust in the world system and in preventing tensions on that front from increasing.