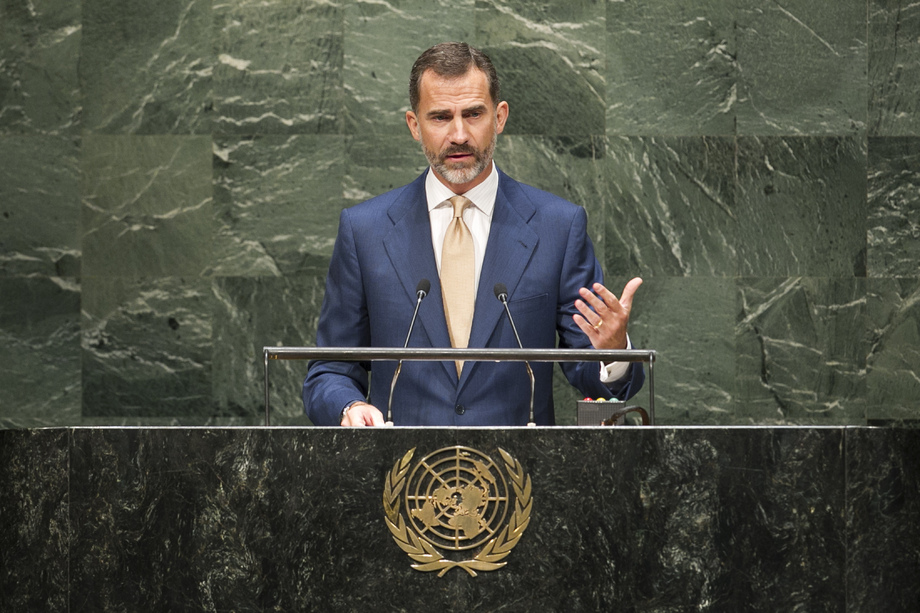 FELIPE VI, King of Spain, said it was a great honour and privilege to address the General Assembly at the beginning of his reign.  Presenting the potential benefits to the international community of a “renewed” Spain, he highlighted the pursuit of peace, liberty, justice and human rights in all nations.  Today, his country was exemplary in its commitment to the dignity of the human being, in its solidarity with the underprivileged and in its firm will to build a better reality for all.  Recalling that it would soon be four decades since the beginning of Spain’s political transition from a dictatorship to a democracy, he said his country had built a social and democratic order based on the rule of law, which protected all citizens.

On economic development, he said Spain, particularly since the second half of the last century, had placed its economy among the first in the world and among the most open and competitive.  It strongly supported a global and sustainable way of economic development that generated employment and protected individuals and their social rights; it was also respectful of the environment and mindful of international norms.  On cultural diversity, he said the strength of Spanish as a universal language, which was shared by dozens of countries and hundreds of millions of people on all continents, contributed significantly to a greater cultural and linguistic diversity in the global arena.  In that regard, the Spanish language must fully assume its formal position as an official language of the United Nations and as a working language that was fully used and represented.

He also said that continental integration of the European Union was an objective of his country in its pursuit of a Europe that was more united and cohesive.  Likewise, Spain aimed to contribute towards the stability of the Middle East and the Arab world, recognizing that peace in those regions was essential to achieving peace in the world.  The international community’s primary objective must be to prevent wars, he stressed, adding that should it fail to do so, it must protect and assist the innocent victims.  A tapestry version of the Guernica by the Spaniard Pablo Picasso, which hung outside the Security Council entrance, served to remind all of the fatal consequences of the international community’s inability to prevent and resolve conflicts.  “When brutality triumphs in one part of the world, no one is beyond its reach.  We are all its victims.”

As part of its unconditional support to the United Nations and in service of the international community, he said his country was taking another step forward as a candidate for a non-permanent seat in the Security Council for the period 2015-2016.  As there could be no lasting peace or security without sustainable development, Spain had contributed $30 billion to global development, nearly $1 billion of which was earmarked for attainment of the Millennium Development Goals through a fund created by Spain and co-led by the United Nations Development Programme (UNDP) — the largest contribution made by any single country.

Recalling that it had been 30 years since his father, King Juan Carlos I, had addressed the Assembly for the first time, he said that today Spain was open to a new age and remained ready to be an active and responsible member of the international community to uphold a stronger United Nations.